375,000 Rohingya refugees will be helped by a $1 million award from the Aurora Prize for Awakening Humanity 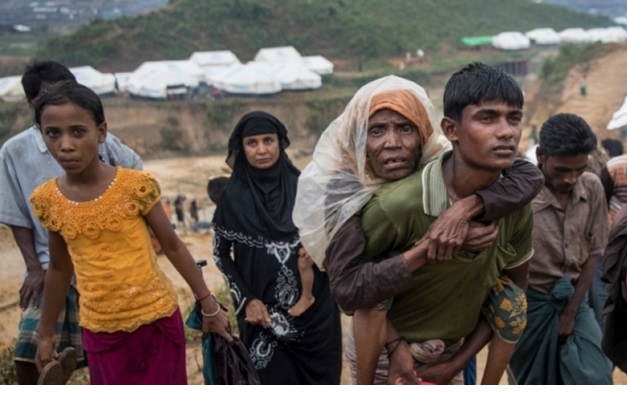 Three international organisations share details about how the $1,000,000 Aurora Prize for Awakening Humanity will be used to positively impact the Rohingya refugees in Myanmar’s Rakhine state

Mr. Kyaw Hla Aung, a lawyer and activist jailed repeatedly for his peaceful work, has been recognised for his dedication to fighting for equality, education and human rights for the Rohingya in Myanmar. Mr. Aung was selected out of 750 nominations by the Aurora Prize Selection Committee members, and he chose to award the prize to three international organisations providing medical aid and assistance to Rohingya refugees across South East Asia: Médecins Sans Frontieres, the International Catholic Migration Commission, and MERCY Malaysia.

Médecins Sans Frontieres is directing the Aurora funds to further advance the emergency response in Balukhali Makeshift Settlements in Bangladesh. MSF estimates that the initiative will benefit approximately 250,000 Rohingya refugees.

Vickie Hawkins, Executive Director of MSF UK said, “I am grateful to Mr. Kyaw Hla Aung for nominating MSF’s work in Bangladesh as one of the areas to receive generous funding as part of the Aurora Prize 2018. MSF has hugely increased operations in the country in response to the unfolding humanitarian crisis in Cox’s Bazar, as hundreds of thousands of Rohingya refugees have fled across the border from Myanmar and are living in a precarious situation. Our team of more than 2,000 staff is running 10 health posts, four primary health centres (open around the clock), and five inpatient health facilities (providing 24-hour secondary healthcare). This potential support comes at a crucial time, especially as the monsoon season approaches and with it the likelihood of devastating flooding and landslides in the camps.”

The International Catholic Migration Commission (ICMC) is allocating its share of the Aurora funds to two initiatives directed at empowering Rohingya refugees in Klang Valley and Kuala Lumpur in Malaysia and improving damaged infrastructure at the Camp of Kutupalong settlement in Bangladesh. ICMC estimates that more than 20,000 people will benefit from these projects.

Monsignor Robert J. Vitillo, Secretary General of ICMC said, “we are honoured by Mr. Kyaw Hla Aung’s choice of ICMC as one of the recipients of the Aurora award. As a lawyer and human rights activist, Mr Aung has peacefully defended and advocated for the rights of the Rohingya minority and has faced long years of imprisonment as a result. He is an inspiring example of profound commitment to justice that comes at a personal cost. We would use the Aurora award to advance our work with Rohingya and other refugees in Malaysia and elsewhere.”

MERCY Malaysia will use its share of the Aurora funds to provide primary and maternal health care and operational support to Rohingya people through collaboration with the Rakhine State Health Department in Sittwe IDP camps and Kyauktan Village in Myanmar. MERCY Malaysia estimates that more than 101,000 Rohingya people will benefit from this initiative.

Dr Ahmad Faizal Mohd Perdaus, President, MERCY Malaysia said, “having worked in Sittwe, Rakhine, in the last few years, and more recently in Cox’s Bazar, Bangladesh, to provide humanitarian aid, MERCY Malaysia recognizes the severe suffering of the Rohingya people. Mr Aung’s selfless dedication to his people’s cause makes him a fully deserving candidate for the 2018 Aurora Humanitarian Award. MERCY Malaysia is honoured to be named as one of Mr Aung’s beneficiaries for the Aurora Prize and will utilize it to continue providing essential relief aid to the underserved Rohingya communities in Myanmar, Bangladesh and Malaysia.”

Vartan Gregorian, Co-Founder of the Aurora Prize and Member of the Selection Committee said: “ We remember the horrors and violence experienced by Armenians – especially women and children – during the Genocide, and we strongly believe that these humanitarian projects recommended by our latest laureate, Kyaw Hla Aung, will have a long-lasting and positive impact for the Rohingya people in Myanmar and beyond. These organizations have made and will continue to make significant contributions in advancing humanitarian causes.  We are pleased to see the Aurora Prize aiding these outstanding organizations.”

The impact of the Prize has been felt across Africa, South America, and now Asia. In 2016, non-governmental organisations received funds through the Aurora Prize to support their work in Rwanda, Ethiopia, the Democratic Republic of the Congo and Brazil to combat child poverty and advance aid and rehabilitation for child refugees and orphans. Projects chosen in 2017 supported hospitals and provided education and medical and psychological care to war and HIV/AIDS-affected children, orphans, child-led families and rape survivors in Sudan, South Sudan, Tanzania, Malawi, Kenya and Northern Uganda.

About the Aurora Humanitarian Initiative

Further information is available at www.auroraprize.com

About the Aurora Prize for Awakening Humanity

The Aurora Prize for Awakening Humanity is a global humanitarian award established to recognize modern day heroes and the exceptional impact their actions have made on preserving human life and advancing humanitarian causes in the face of adversity. On behalf of the survivors of the Armenian Genocide and in gratitude to their saviors, an Aurora Prize Laureate is being honored each year between 2015 and 2023 (in remembrance of the eight years of the Armenian Genocide 1915-1923) with a US$100,000 award as well as the unique opportunity to continue the cycle of giving by nominating oranisations that inspired their work for a US$1,000,000 award.

Further information is available at www.auroraprize.com

The International Catholic Migration Commission (ICMC) was founded in 1951, in the wake of the massive displacement caused by the Second World War, to coordinate the work of Catholic oranisations in responding to the needs of migrants, refugees and displaced persons, as well as to advocate in intergovernmental and governmental institutions on their behalf.

MERCY Malaysia provides a platform for Malaysians to unite and take their place on the international humanitarian stage by helping at times of crises.