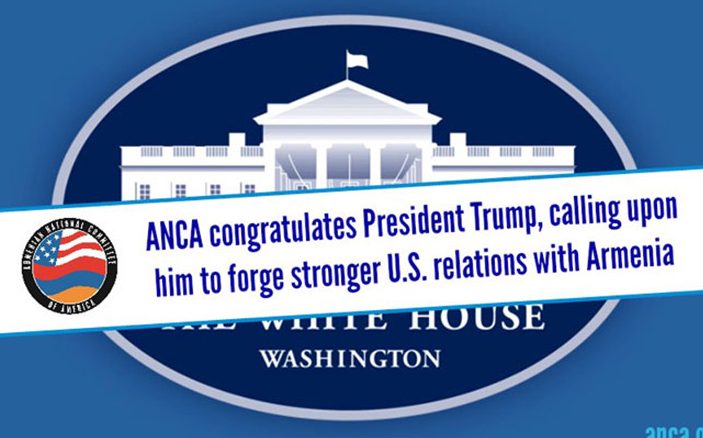 The Armenian National Committee of America (ANCA) has issued a statement regarding the January 27, 2017, White House Executive Order on immigration, titled, “Protecting the Nation from Foreign Terrorist Entry into the United States”.

The statement notes that the committee remains engaged and concerned regarding the developing situation surrounding the White House’s January 27th immigration Executive Order, both at the level of U.S. policy and in terms of this action’s impact on Armenian individuals and families.

“As has been widely reported, the Executive Order, titled, “Protecting the Nation from Foreign Terrorist Entry into the United States,” places restrictions on travel to the U.S. by citizens of Syria, Iraq, Iran, Libya, Yemen, Somalia and Sudan.

This travel ban has been applied to refugees and visa holders from these designated countries as well as to those with green cards who already have permanent residency or other legal status in the US. The ban, initially in effect for a period of 90 days, may become permanent. We have witnessed uneven and inconsistent enforcement of the order, reflecting apparent confusion among government officials and within the travel industry. The federal courts have issued a stay on the enforcement of the order, but the extent of this legal action, and how it will affect non-U.S. citizens, remains unclear. Future Congressional and court action may also influence how non-U.S. citizens and their families are impacted.

As the ANCA continues to engage relevant stakeholders – including Congress and the White House – we offer the following recommendations:

1) The ANCA encourages Armenians whose relatives or friends have been detained at U.S. ports of entry or who have been blocked from re-entry to the U.S. to contact us immediately at travel@anca.org or (202) 775-1918. Please be prepared to share basic information, including a description of the situation and the name of any legal counsel. (This information will remain confidential.)

2) Until there is greater clarity regarding the full legal scope and nature of these restrictions, the ANCA recommends that Armenians from Iran, Iraq, Libya, Somalia, Sudan, Syria, and Yemen, who are not U.S. citizens, refrain from leaving the U.S., due to the increased risk that they will be denied re-entry, regardless of their immigration status.

3) The ANCA is regularly consulting with civil and legal rights organizations for the most up to date information on this unfolding situation and will provide community updates, as they become available.

As Americans of Armenian heritage – a community of proud immigrants, many descended from the families of Armenian Genocide survivors with roots in Syria, Iraq, Iran and other countries cited in this order – we remain deeply concerned by the moral, legal and humanitarian implications of these new restrictions. We will act vigilantly to protect the human and legal rights of Armenians harmed by this executive order,” the statement reads.

"Very superstitious…writing on the wall…"