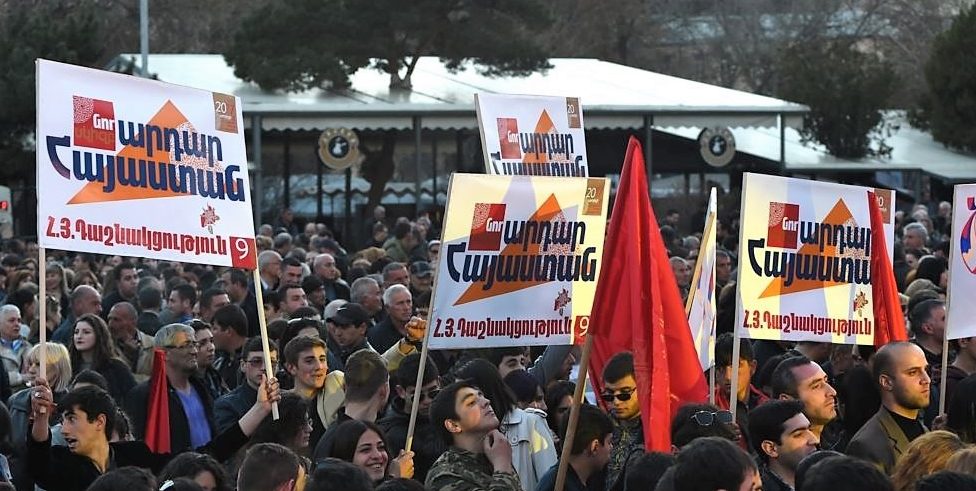 (RFE/RL)- The Armenian Revolutionary Federation (Dashnaktsutyun), President Serzh Sarkisian’s junior coalition partner, wrapped up its parliamentary election campaign on Thursday with a rally in Yerevan attended by thousands of supporters.

One of the party’s leaders, Armen Rustamian, expressed confidence that Dashnaktsutyun will garner at least 5 percent of the vote needed for having seats in the next National Assembly. He dismissed government-sponsored opinion polls showing that a considerably lower percentage of citizens are ready to vote for it.

“Haven’t we passed [the 5 percent threshold] until now?” Rustamian told RFE/RL’s Armenian service (Azatutyun.am). “Why shouldn’t we pass it this time around?”

“We have a stable electoral base. Everyone knows that,” he said after addressing the crowd that gathered in Yerevan’s Liberty Square.

Dashnaktsutyun won 5 seats in the 131-member parliament in the last elections held in 2012. It backed Sarkisian’s controversial constitutional reform before reaching a new power-sharing deal with him a year ago. The party, which is particularly influential in the Armenian Diaspora, is now represented in the Armenian government by three ministers.

In his speech, Rustamian claimed that Dashnaktsutyun is helping to bring about “revolutionary” changes in Armenia. He said the country’s ongoing transition to the parliamentary system of government will end “one-man rule spreading injustice.” He was also confident that Sunday’s elections will be democratic.

“We are convinced that April 2 will herald the start of a new period,” declared Rustamian.

“Others are saying that they are going to make changes, whereas we are already making changes,” another Dashnaktsutyun leader, Aghvan Vartanian, told the crowd.

Dashnaktsutyun had previously been part of Sarkisian’s government in 2008-2009. It pulled out of the coalition cabinet in protest against his Western-backed policy of rapprochement with Turkey. The party favors a hard line on Turkish-Armenian relations and the Nagorno-Karabakh conflict.

Rustamian reaffirmed on Thursday Dashnaktsutyun’s strong opposition to a compromise Karabakh settlement proposed by international mediators and accepted by the Armenian government as a basis for negotiations. But he made clear that it is ready to remain allied to Sarkisian as long as the president does not move to sign and implement such a peace deal.

In his speech, Rustamian denounced opposition leader and former President Levon Ter-Petrosian’s pre-election statements to the effect that a Karabakh peace involving territorial concessions to Azerbaijan is vital for Armenia’s security and prosperity.

Exchange of territories for status will be disastrous – David Babayan