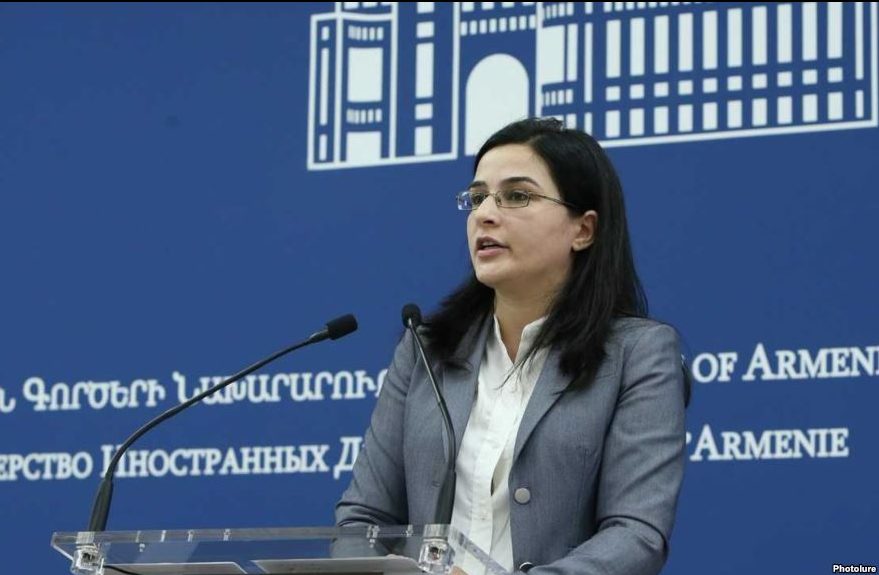 (Azatutyun)- Armenia has downplayed the significance of a declaration referring to Nagorno-Karabakh adopted by the foreign ministers of Turkey, Iran and Azerbaijan at their meeting in Istanbul earlier this week, reminding that “the OSCE (Organization for Security and Cooperation in Europe) Minsk Group co-chairmanship is the only format with an international mandate to help settle the conflict.”

“It is within this format that the principles of the conflict settlement are set forth as a whole. A selective treatment of those principles does not in any way contribute to the efforts towards a peaceful settlement,” Armenian Foreign Ministry spokesperson Anna Naghdalian said on Tuesday.

“Wordings made outside the framework of the Minsk Group co-chairmanship and contradicting it are artificial and have nothing to do with the settlement of the problem,” she added.

The Nagorno-Karabakh conflict was one of the issues on the agenda of a trilateral meeting of the foreign ministers of Turkey, Iran and Azerbaijan that was held in Istanbul on October 29.

In the declaration adopted after the end of the negotiations Mevlut Cavusoglu, Mohammad JavadZarif and Elmar Mammedyarov called for a peaceful resolution of conflicts in the region “based on the principle of territorial integrity.” The three foreign ministers specifically highlighted the importance of solving the Nagorno-Karabakh conflict in accordance with this principle.

Nagorno-Karabakh, populated mainly by ethnic Armenians, declared independence from Azerbaijan amid the collapse of the Soviet Union, triggering a war that claimed an estimated 30,000 lives and displaced hundreds of thousands of people.

A cease-fire was called in 1994, but decades of internationally mediated negotiations with the involvement of the OSCE’s Minsk Group have failed to result in a resolution. The Minsk Group is co-chaired by the United States, Russia and France.

Iran, Turkey back Karabakh settlement based on Azerbaijan's territorial integrity