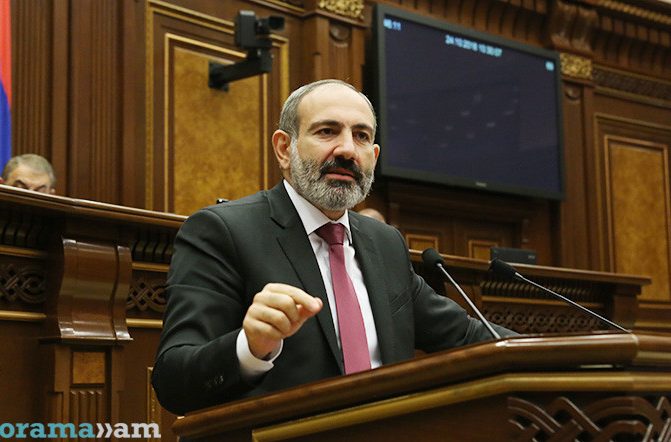 (Azatutyun)- Nikol Pashinian’s efforts to force fresh general elections in December cleared another legal hurdle on Wednesday when Armenia’s parliament agreed not to reappoint him as prime minister one week after his tactical resignation.

Pashinian stepped down on October 16 to pave the way for the dissolution of the current National Assembly in which he controls only a handful of seats. Under the Armenian constitution, snap elections can be called only if the assembly fails to elect a prime minister within the next two weeks.

Some legal experts believe that the constitution also requires lawmakers to vote on at least one candidate for prime minister during the two-week period. In what was a mere formality designed to prevent any questioning of the legality of the parliament’s dissolution, Pashinian’s Yelk alliance on Tuesday nominated him for the post of prime minister on the assumption that the parliament will reject his candidacy.

“This is done so that we fully adhere to procedures set by Armenia’s constitution in order to avoid differing interpretations of legal definitions and meaningless legal debates,” Yelk’s Lena Nazarian told the parliament.

Pashinian, who is continuing to perform his prime-ministerial duties in the interim, made the same appeal just before the parliament vote. “I want to thank those who will not for me or will not vote at all,” he said after answering questions from several deputies.

Only 12 deputies took part in the vote and none of them backed Pashinian against his wishes. Eleven of them abstained.

The parliament will again vote on the prime minister next week. Another failure to elect a premier would mean its automatic dissolution.

The HHK as well as the BHK and Dashnaktsutyun have only reluctantly agreed to the holding of the elections in December. Early this month they tried unsuccessfully to delay the vote until next May or June.

Pashinian and his allies are tipped to win the upcoming polls by a landslide. The popular premier said on Wednesday that they will complete the victory of last spring’s “velvet revolution” that brought him to power.