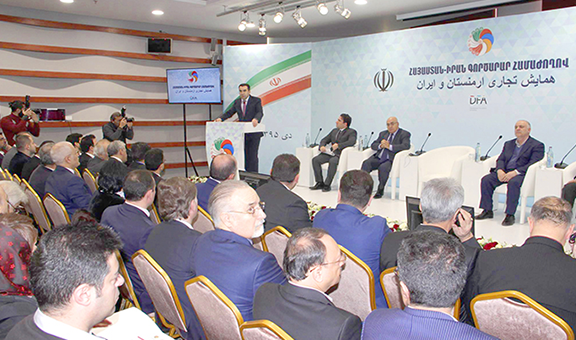 According to Armenia’s First Deputy Minister of Economic Development and Investments Garegin Melkonyan, it is important to show Iranian businessmen the opportunities available to them in Armenia. He said the removal of sanctions against Iran has created good preconditions for the implementation of mutually beneficial projects.

He said the business forum should become a powerful stimulus for the development and strengthening of the Armenian-Iranian trade and economic ties, prompted by the liberal legislation of Armenia, which provides the Iranian businessmen with the same rights as the citizens of the country.

“Armenia is also attractive in terms of the possibility of entering the markets of the Eurasian Economic Union (EEU) and the EU. As a member the EEU Armenia enjoys benefits for exports of raw materials. Great opportunities are opening up for Iranian businessmen who want to become residents of free economic zone in Armenia. They will work in favorable conditions, and their products will be exported as produced in Armenia,” said Melkonyan.

He recalled that the new Armenian government is doing everything possible to improve the investment climate in the country.

“The trade turnover between Armenia and Iran in 2015 amounted to $280-$290 million, but it could be much more,” Melkonyan said.

In conclusion, he urged the Iranian businessmen to participate in joint projects with their Armenian colleagues.

The North-South transport corridor was also discussed during the business forum. According to Homayoun Haeri, it “will open a new page in relations between Armenia and Iran.”

Stressing the necessity of building up trade turnover between the two countries, he said that it will be possible to achieve this goal by opening exhibitions, exchanging visits and improving transport infrastructure. In this context, he said, it is very important to build North-South motor road.

Haeri said that the countries have untapped potential for expanding their trade and economic ties and pointed out successful cooperation in energy, culture and healthcare sectors as examples.

The goal of 556 km-long North-South Transport Corridor project is to upgrade Armenia’s main corridor road as part of a broader thrust to improve connectivity, and boost trade, growth and livelihood opportunities in the Caucasus and Central Asia sub-regions.

On December 29, 2015 the first two sections of the North-South transport corridor opened. The first section that stretches from Yerevan to Artashat has become a six-lane road, while the second section which is from Yerevan to Ashtarak has become four-lane road. Both have a 100-110 km/h speed limit and make up a total length of 31 km.

Funds are being released by the Asian Development Bank periodically through a multi-tranche financing facility. The transport corridor will stretch from the southern Armenian town of Meghri, on the border with Iran, to Bavra in the north on the border with Georgia. The North-South transport corridor will enable Armenia to mitigate the effects of the blockade imposed by Azerbaijan and Turkey.

Currently the construction of the road is underway from Artashat to Ashtarak and from Ashtarak to Talin.

The Ministry of Transport, Communications and Information Technology plans also the implementation of separate smaller projects at various sections of the road in order to end the construction both in southern and northern directions by 2019. President Sarkisian and Rouhani at the business forum (Photo: president.am)