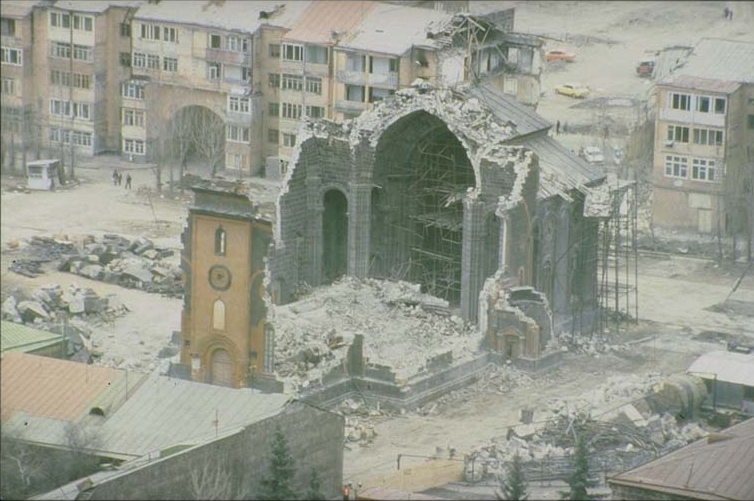 (Azatutyun)- Prime Minister Nikol Pashinian chaired a special meeting of his cabinet in Gyumri on Friday as Armenia marked the 30th anniversary of a catastrophic earthquake that killed more than 25,000 people and left hundreds of thousands of others homeless.

Pashinian also led an official commemoration ceremony in Armenia’s second largest city, laying a wreath at a local memorial to the victims of the earthquake.

“The greatest damage caused by the disaster was probably the devastations that occurred in people’s souls,” he said at the ceremony. The recent regime change in the country and reforms promised by its new government should help to “restore the people’s hopes, confidence and optimism,” he added.

The magnitude 6.8 quake struck northwestern parts of what was then a Soviet republic of 3.5 million residents on the morning of December 7, 1988. Its epicenter was near Spitak, a small town razed to the ground. Gyumri was also hit hard.

The huge death toll was widely blamed on substandard construction exposed by the calamity. It turned out that many apartment blocks and houses in what many Armenians still refer to as a “disaster zone” were built in violation of seismic safety standards.

Moscow launched a large-scale housing reconstruction program in the area in the following months. The rebuilding efforts stalled, however, with the collapse of the Soviet Union followed by a sharp decline of the Armenian economy. Tens of thousands of families continued to huddle in the 1990s in metal or wooden shacks, commonly known as “domiks,” lacking basic amenities.

The protracted reconstruction of the economically depressed area was the main focus of Friday’s cabinet meeting dedicated to the earthquake anniversary. Avetik Eloyan, head of the government’s Urban Development Committee, told ministers that more than 4,800 families that lost their homes in 1988 received new houses or apartments from the state from 2008 through 2017.

Eloyan said that almost 500 other families other in Gyumri and other affected communities remain on a government waiting list of persons eligible for free housing. The government is committed to providing them with new homes by the end of 2020 at a combined cost of around 3.5 billion drams ($7.2 million), he said.

The official cautioned, though, that the figure needs to be reevaluated. “There are people who are really homeless but there are also those who received apartments but retained their shacks,” he explained. “So there are many issues that need to ascertained.”

Gyumri Mayor Samvel Balasanian, who also attended the cabinet meeting, said in this regard that there are currently 2,856 “domiks” in the city and that many of their residents migrated to Gyumri after the earthquake. And 456 of these supposedly temporary shelters are now empty, added Balasanian.

Pashinian responded by telling the government to form a task force that will look into the housing situation and submit a detailed report to him within two months.

“We know that the consequences of the December 1988 earthquake have still not been eliminated but we don’t know the scale of work that is needed for [completing the reconstruction,]” said the prime minister. “Therefore, the task force should try to find the answer to this question as soon as possible.”