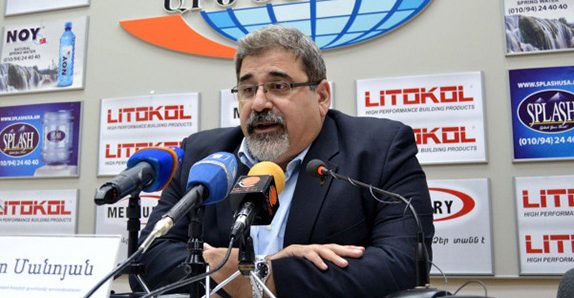 (Tert.am)—If Armenia recognizes the Nagorno-Karabakh (Artsakh) Republic, the two Armenian states will be able to embark on a unification plan sometime in the near future, said Giro Manoyan, the Political Affairs Director of the Armenian Revolutionary Federation-Dashnaksutyun (ARF-D) Bureau.

“In our pre-election platforms, we have always stated Artsakh’s reunification with Armenia as our final goal. Both the proclamation of independence and the activities towards recognition are tactical steps in that direction,” Manoyan said.

He added that they do not consider realizing the plan at the moment. “If Armenia recognizes [Artsakh’s] independence, the Republics of Armenia and Artsakh may later decide themselves whether to unify [into a single country],” he explained.

The politician, who is the ARF-D’s proportional representation candidate in the upcoming parliamentary election, said they rule out the possibility of concessions unless Azerbaijan recognizes the Nagorno-Karabakh population’s right to self-determination.

“From our standpoint, the statements by high-ranking officials, that recognition may lead to a war, are a wrong policy on the part of Armenia. If that really is the case, why do we then need to ask a third party to recognize Artsakh?” Manoyan concluded.