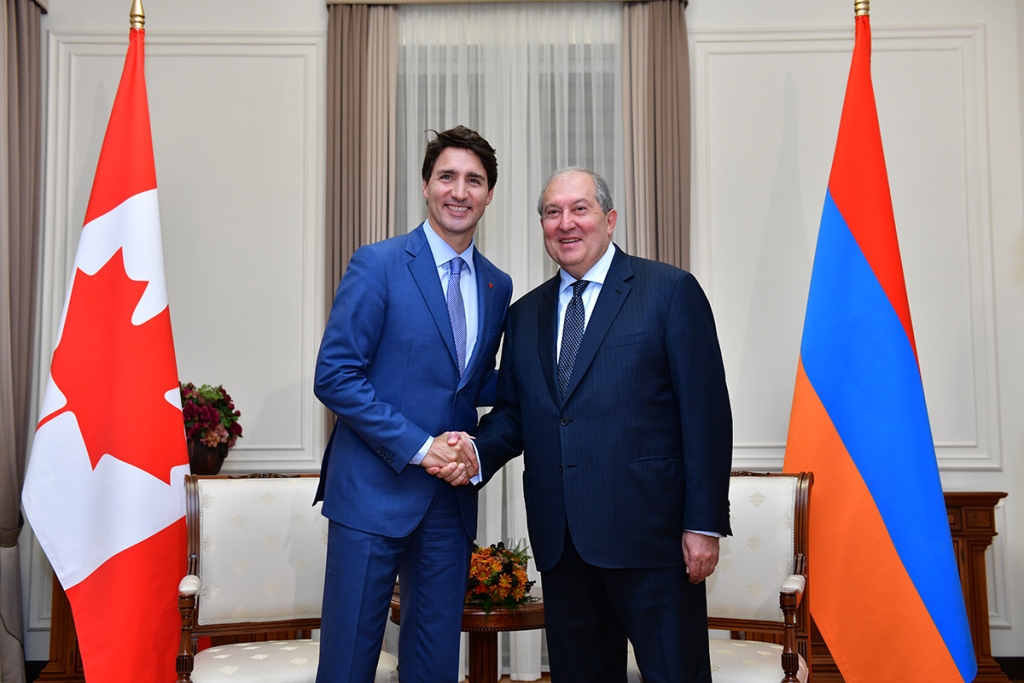 YEREVAN- President of Armenia Armen Sarkissian received Prime Minister of Canada Justin Trudeau on October 11, who is in Armenia on a state visit.

Armen Sarkissian welcomed the Prime Minister of Canada in Armenia’s capital city and the temporary capital of Francophonie. “Our people are well aware of your family. Canada is a very friendly country for Armenia. We have always appreciated the warm attitude of the people and Government of Canada towards the Armenians who are in need. Armenians will never forget your act when you personally greeted our compatriots from Syria. These are not just good words, but are words of deep appreciation.

Of course, we also greatly value what your father did. When you visited Armenia in the past it was the period after the earthquake and the country was standing on the threshold of independence. But it was also a period when Karabakh movement started, which turned into an independence movement”.

Prime Minister of Canada Justin Trudeau said, “I am glad to be back to Armenia. It’s a pleasure to talks about the Armenian-Canadian friendship, which has a good background, but a greater potential for future”. According to him, Armenia is in a wonderful political situation at the moment, which leads to a more realistic and deeper democracy and greater economic opportunities.

The Canadian PM highly appreciated the contribution of over 60 thousand citizens of Armenian origin in the success story of Canada.

The Canadian PM also hoped that Armenia and Canada will manage to shape a firmer future, noting that Armenians are a unique people and wherever they live they preserve their national identity, language and culture.

The interlocutors shared the opinion that the two countries can successfully cooperate in education and IT.