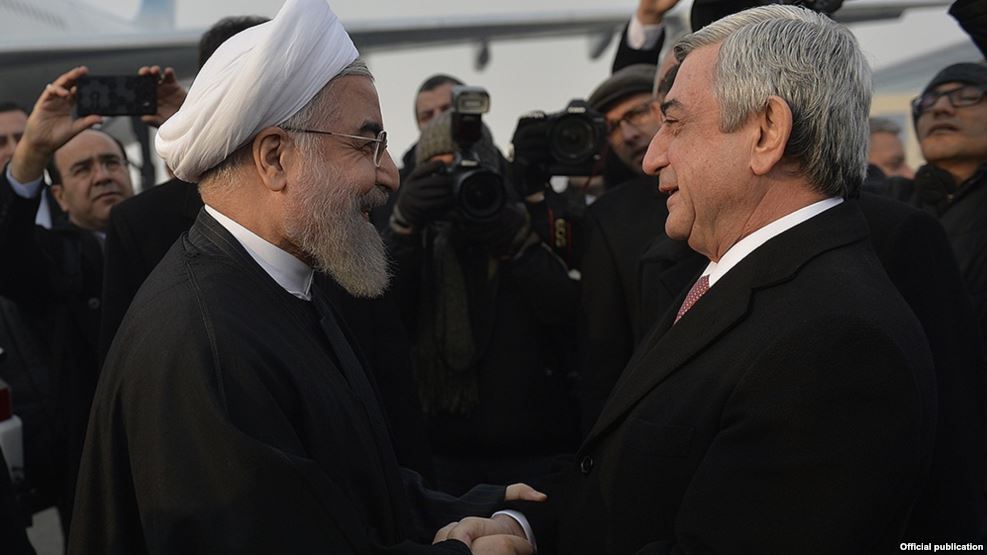 Iran will increase exports of natural gas to Armenia and deepen broader economic ties with its Christian neighbor, Iranian President Hassan Rouhani said during an official visit to Yerevan on December 21.

Rouhani also called for a peaceful settlement of the Nagorno-Karabakh conflict after talks with his Armenian counterpart Serzh Sarkisian. The latter again praised Tehran’s “balanced” stance on the unresolved conflict.

“We consider the Republic of Armenia a friendly country and want to make our bilateral relations even warmer and closer,” Rouhani said in his opening remarks at the talks. “Our countries belong to the same culture and civilization. Relations between our peoples have always been cordial and friendly.”

In an ensuing joint statement, the Armenian and Iranian presidents said they “reaffirmed their determination to further expand bilateral relations.” They singled out joint energy projects planned or already implemented by the two neighboring states.

“We must do everything to utilize the full potential of Armenian-Iranian relations in the coming months and years,” Rouhani told a joint news briefing with Sarkisian. “We currently have good relations in the energy sector but have decided in the course of this visit to further develop cooperation in this area.”

In particular, he said, the two sides agreed to increase Iranian gas supplies to Armenia. Iran will also serve as a transit route for Armenia’s gas imports from Turkmenistan, added the Iranian leader. He did not specify the volume of additional gas supplies sought by Yerevan.

The Armenian government signaled plans to buy more gas from Iran earlier this year. A government delegation met with representatives of Iran’s National Iranian Gas Export Company for that purpose in Tehran on October 31 and November 1. Armenia has until now paid for Iranian gas with electricity delivered to the Islamic Republic. This swap arrangement is due to be expanded significantly after the construction of a third transmission line connecting the Armenian and Iranian power grids. It is slated for completion by 2019.

Sarkisian and Rouhani stressed the importance of the new line in their joint communique. The statement also reaffirmed Yerevan’s strong support for the signing of a free-trade deal between Iran and the Eurasian Economic Union, a Russian-led trade bloc which Armenia joined two years ago.

One of the five Armenian-Iranian agreements signed during Rouhani’s visit calls for a “joint use” of the sole border crossing between the two countries. It was not immediately clear whether this has to do with a “free economic zone” which is expected to be created along Armenia’s border with Iran. Armenian officials have said that Iranian entrepreneurs will be able to set up manufacturing firms in the tax-free zone.

Rouhani and Sarkisian also discussed regional security — and the Karabakh conflict in particular — at their meeting held before the two men opened an Armenian-Iranian business forum in Yerevan.

“Azerbaijan and Armenia are our partners and we hope that it will be possible to achieve a lasting peace in Karabakh through negotiations,” Rouhani told the press. “Such a peace is in the interests of all regional states. There is definitely no military path to achieving peace.”

“We highly appraise Iran’s balanced position on the solely peaceful resolution of the Karabakh problem based on international law,” Sarkisian said for his part. “We reaffirmed that there can be no military solution to the Nagorno-Karabakh conflict and emphasized the inadmissibility of any action aimed at spreading tension and instability in the region.”