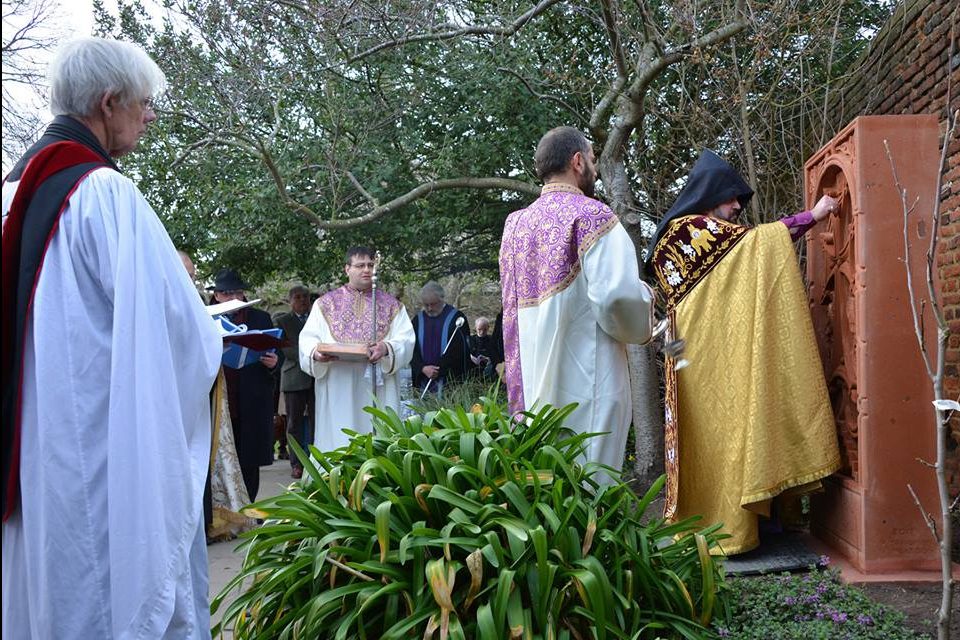 During the evensong followed by the dedication ceremony, the Dean of Canterbury Robert Willis emphasized the symbolism of installation of the Armenian cross-stone in Canterbury, the spiritual centre of the United Kingdom, noting that khachkar is considered as a symbol of peace, reconciliation and hope.

In his welcoming speech Kirakossian noted that from this day on the Armenian cross-stone, a magnificent symbol of the Armenian medieval culture, will be a part of the more than 1,400-year old rich history of Canterbury. The Ambassador underlined that this cross-stone has been marked to symbolize the Armenian genocide of 1915. In that regard, Arman Kirakossian recalled with gratitude the efforts of the Archbishop of Canterbury Randall Davidson, who not only gathered and published British materials on the Armenian Genocide, but played also a significant role in the process of adoption of the resolution on the Armenian issue and financial assistance, provided by the League of Nations to the First Republic of Armenia.

According to Kirakossian, the fact that the Armenian Genocide went unpunished was a major impetus for future dictators and crimes against humanity as it happened during the Holocaust, genocides in Cambodia, Rwanda and Darfur. ‘In this sense ‘Never again’ is a challenge to nations and to us all, because it is a bitter truth that too often, the world has failed to prevent the killing of innocent people on a massive scale,” he said. Kirakossian stressed Armenia’s commitment and resolve towards a continued effort of international recognition of the Armenian Genocide, as well as advancing the human rights agenda, preventing atrocity crimes, including genocides.

The main message of the Genocide is the message of survival, resilience, hope, a triumph of life over death, and celebration of new victories of the Armenian people.

The year women became eligible to vote in each country