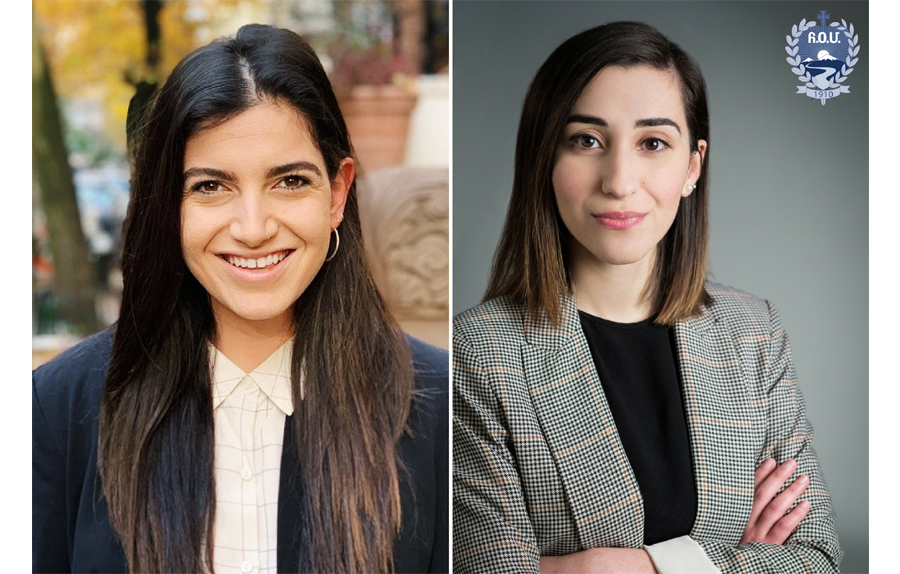 The Armenian Relief Society (ARS), Inc. announced the appointment of Christina Mehranbod as Coordinator of the ARS activities at the United Nations (UN) and of Maral Tutunjian as the ARS UN Assistant Coordinator. Mehranbod and Tutunjian will be based in New York City, representing the ARS at the UN Headquarters during meetings and projects initiated by various UN Missions, UN agencies, and Non-Governmental Organizations in affiliation.

Mehranbod is a graduate of the University of California, Berkeley. She holds a B.A. in Public Health, a minor in Spanish Language & Literatures and is currently pursuing a Master of Public Health in Epidemiology at the Columbia University Mailman School of Public Health. Tutunjian is a graduate of Montclair State University. She holds a B.A. in Psychology, and a minor in Leadership Development through Civic Engagement. The two coordinators are also multi-lingual and their combined languages include Armenian, English, Spanish, Arabic, Farsi, and Turkish.

Mehranbod and Tutunjian will work to develop strategic partnerships for the ARS at the UN in ways that promote the ARS mission, such as the optimal social, health, and educational well-being of women and children in Armenia, women’s financial independence, global disaster preparation and response, and human rights advocacy.

“We are excited to welcome Christina and Maral to the ARS team. Their appointment further strengthens our resolve and dedication to the values and principles shared both by the ARS and the United Nations. As one of the 5,083 organizations world-wide recognized by the UN, we are excited that our new coordinators will bring their educational background and experience to advance our role within this global institution” said ARS Executive Director, Verginie Touloumian.

“I am honored to receive the opportunity to serve as the ARS UN Coordinator and look forward to working for an organization that serves Armenia and the Armenian communities worldwide through the advocacy and promotion of human rights, social justice, gender equality, economic development, and more. I wholeheartedly believe in the work of this organization, domestically and internationally, and am prepared to represent the ARS at the United Nations,” said Mehranbod.

Established in 1910, the ARS is a non-profit organization that operates in 28 countries serving humanitarian needs of Armenians and non-Armenians alike. The organization was admitted into the ranks of UN’s Economic and Social Commission (ECOSOC) in 1998.