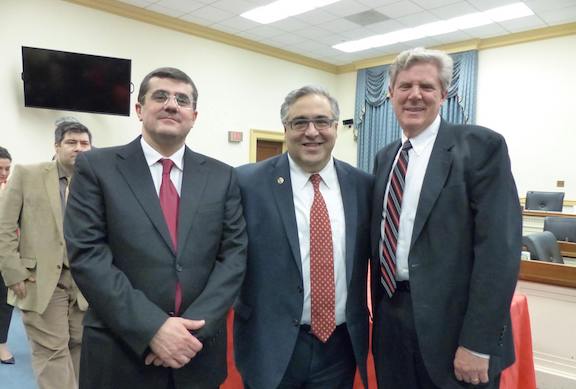 “It is symbolic for us to organize this event on the occasion of Artsakh’s independence in the United States Congress as both our nations and states share the same values,” said Prime Minister Harutyunyan, who went on to outline key factors of Artsakh’s economic and democratic progress over the past quarter century.  He commended the leadership of House Foreign Affairs Committee Chairman Ed Royce (R-CA), Ranking Member Eliot Engel (D-NY) and senior member Brad Sherman (D-CA) for their efforts to support the cease-fire and implement investigative mechanisms.  The Prime Minister thanked legislators for appropriating aid for Nagorno Karabakh, underscoring the life-saving nature of The Halo Trust’s ongoing demining efforts and the importance of allocating assistance for the expansion of the Lady Cox Rehabilitation Center in Artsakh’s capital, Stepanakert.  The full text of his translated remarks is provided below.

The Podesta Group, a paid foreign agent of the Azerbaijani government of Ilham Aliyev, circulated letters condemning the event to Congressional offices, and a small group of protesters gathered outside the Capitol Hill offices to register their opposition to this annual American commemoration of Artsakh’s independence.