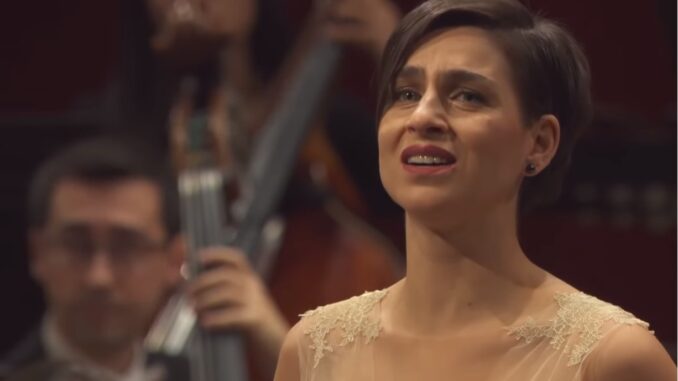 (The lithuania tribune)- The winners of the International Opera Awards were presented at a gala ceremony in London’s Sadler’s Wells theatre yesterday, April 29. Asmik Grigorian took the Female Singer of the Year award for her role as Salome at Salzburg festival.

She is known as the daughter of famous opera soloists Irena Milkevičiūtė and Geham Grigorian became a world opera sensation over summer and on this evening her title was anchored – she is currently the best female opera soloist in the world.

One of the founders of the Bohemians, long time soloist at the Vilnius City Opera, she performed last in Vilnius at Dalia Ibelhauptaitė’s Pikų Dama [Queen of Spades], performing the role of Liza. Asmik Grigorian career once started namely at the Congress Palace with the now iconic role of Musette in La Boheme. And the rest is, as they say, history. A long, stormy and emotional journey to the largest stages and highest accolades. Today, Asmik is preparing for the main role at La Scala in famous director Graham Vick’s opera The Dead City.

“Trust. Understanding. Support. Love. What else could you want? Perhaps some time in life? So I could thank everyone, who helped me reach where I am today. Thank you,” Asmik Grigorian spoke laconically when receiving her award, while her husband, director Vasily Barkhatov was also nominated for an award this year alongside such famous creators as Calixto Bieito, Katie Mitchell and Krzysztof Warlikowski.