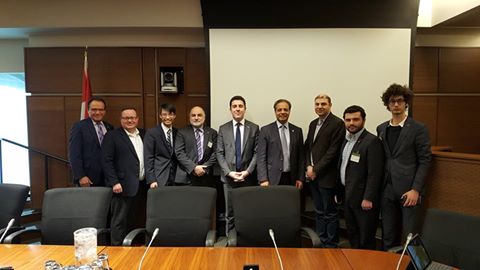 Ottawa – On March 8, 2017, the Canada-Armenia Parliamentary Friendship Group held its annual meeting in Ottawa. A number of parliamentarians and guests from the Armenian Embassy in Canada and the Armenian National Committee of Canada were present at the meeting that was held under the chairmanship of MP Arnold Chan, president of the friendship group. Also present were vice-presidents, MP Harold Albrecht (CP) and MP Alexandre Boulerice (NDP).

The meeting discussed the upcoming general elections in Armenia, the importance of strengthening the political and economic ties between Canada and Armenia. The meeting unanimously agreed to write a joint letter to Global Affairs Canada, urging the government to consider establishing permanent Canadian diplomatic representation in Yerevan, Armenia.

Armenian Embassy consul, Sasun Hovhannisyan – representing Ambassador Armen Yeganian – and the president of the Armenian National Committee of Canada, Shahen Mirakian had the chance to address the meeting and convey some issues of concern to the Republic of Armenia and the Armenian-Canadian community respectively.

The group reiterated the importance of further advancing the ties between Canada and Armenia and discussed upcoming initiatives.