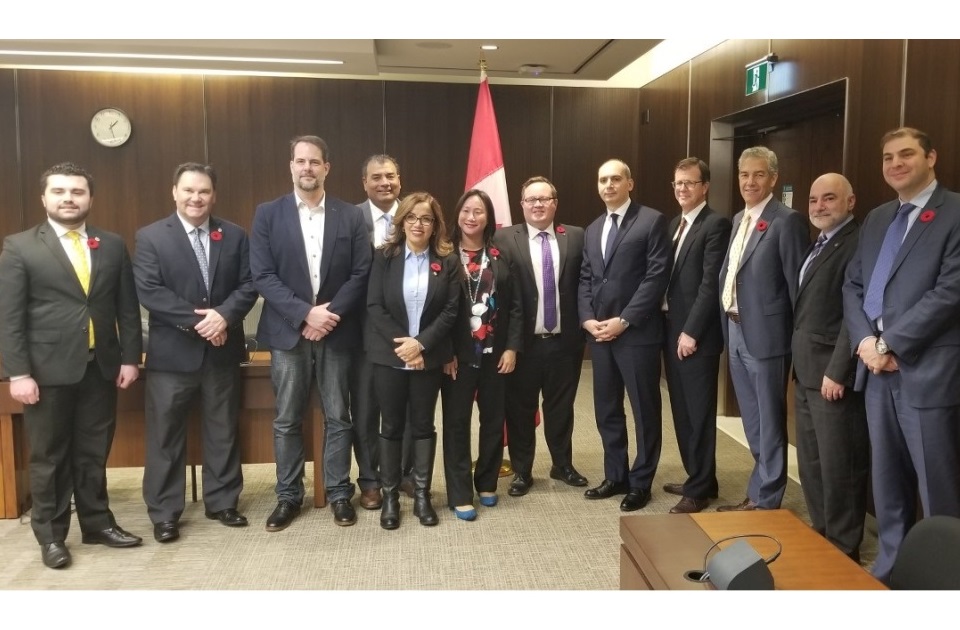 Ottawa – On Tuesday, November 6, 2018, the Canada-Armenia Parliamentary Friendship Group (CAPFG) met in Ottawa, where representatives from Global Affairs Canada were present to brief the group on the latest developments in Canada-Armenia relations.

Parliamentarians from all major political parties, along with guests from Global Affairs Canada, the Embassy of the Republic of Armenia in Canada and the Armenian National Committee of Canada (ANCC) were present at the meeting.

The meeting’s agenda was opened by CAPFG chair, MP Bryan May’s remarks which focused on the bilateral relations between Canada and Armenia, specifically discussing the unprecedented progress that was made during Prime Minister Justin Trudeau’s official bilateral visit, earlier in October. During his visit, the Prime Minister was joined by the Minister of Official Languages, Tourism and La Francophonie, the Hon. Melanie Joly, Ms. Jean Yip, member of parliament for Scarborough-Agincourt and members of the executive staff. Regarding these unprecedented developments, Mr. David Morgan, Deputy Director of Southern Europe and Eurasia at Global Affairs Canada briefed the meeting, highlighting the importance of the recent visit and Canada’s ever strong relations with Armenia.

Pursuant to the motion passed at the 2017 Annual General Meeting, the group once again agreed to continue working with Global Affairs Canada, urging them to actively pursue the establishment of a permanent Canadian diplomatic representation in Yerevan, Armenia.

The Consul General of Armenia in Canada, Mr. Ara Mkrtchian and the president of the Armenian National Committee of Canada, Mr. Shahen Mirakian also addressed the meeting, expressing their profound and positive impressions on the Prime Minister’s latest visit and raising vital issues such as the importance of establishing a permanent Canadian diplomatic mission in Yerevan and the peaceful resolution of the Artsakh (Nagorno-Karabakh) conflict. In a brief presentation, Ms. Jean Yip, member of parliament for Scarborough-Agincourt also spoke about her positive impressions from the bilateral visit to Yerevan and specifically focused on the Prime Minister’s announcement regarding the launch of the “Arnold Chan Initiative for Democracy in Armenia”, which has already provided significant funding to various civil society groups in Armenia.

At the end of the meeting, the friendship group reiterated the importance of further advancing the ties between Canada and Armenia and discussed upcoming initiatives that are aimed towards the advancement of relations.

The CAPFG is chaired by MP Bryan May of Cambridge (Liberal Party of Canada) and vice-chaired by MP Harold Albrecht of Kitchener-Conestoga (Conservative Party of Canada) and MP Alexandre Boulerice of Rosemont-La Petite-Patrie (New Democratic Party of Canada). The ANCC expresses its gratitude to the leadership and membership of the group and wishes them continued success as they advocate for stronger Canada-Armenia relations and for Canadian-Armenians across the nation.