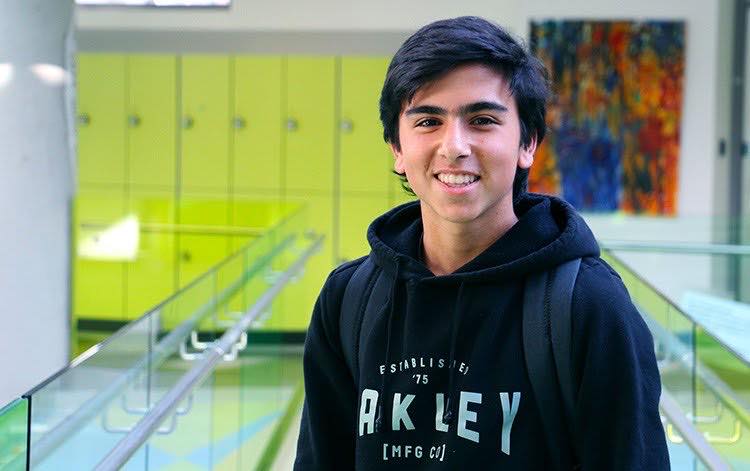 Just over a year ago Aurora Humanitarian Initiative announced the establishment of the Charles Aznavour Scholarship. Aznavour lent his name and his energy to Aurora from the beginning – he was an important part of the first two Aurora Prize ceremonies in 2016 and 2017. It was decided that the new scholarship launched in his memory would be awarded annually to students from France and Francophone countries who will have the opportunity to study at UWC Dilijan – international boarding school in Armenia, part of the UWC movement. This scholarship was envisaged to bring together Aznavour’s two worlds – France and Armenia – as a small way to memorialize those links and to continue to thank Charles Aznavour through the generations.

UWC Dilijan together with the Aznavour Foundation established specific criteria for the scholarship. The successful candidate was expected to demonstrate artistic skills – abilities to compose or perform music, write, act in theatre, paint, etc. Nicolas Aznavour, Charles Aznavour’s son and co-founder of the Aznavour Foundation, personally participated in reviewing the applications and choosing the nominee. Armen Erzingatzian was chosen as the first Charles Aznavour scholar.

Armen, a 17-year-old first-year student at UWC Dilijan, was born in Montreal, Canada and lived there for most of his life. He is a Canadian-Armenian, parents of Armenian descent. Armen is a very curious, motivated person, fascinated by science, biology, passionate about music – Armen has been playing piano since a very young age. Also, for the past two years, Armen has been involved in many activities and volunteering opportunities related to his interests such as working at hospitals, leading a green cooperative at his school and tutoring young kids in French and Math at local kindergartens.

Armen first heard about UWC in the ninth grade when the school’s student counselor visited their class and shortly mentioned UWC – where people from all over the world come, live and study together for two years. The story about the movement fascinated the boy and he told himself that one day he would love to study at the UWC Dilijan College in Armenia. “I am very proud of my origins and the idea of coming back to my roots sounded fascinating,” says Armen. In the fall of 2018, Armen applied through his national committee and became the candidate for the Charles Aznavour Scholarship.

“It was surreal. I couldn’t imagine that I was being considered for this prestigious scholarship, it was a dream. I sent a video to the International Committee telling them who I was, what I did, why I wanted to go to UWC and why I should be the one getting the scholarship. After a while, they sent an email saying I would be going to UWC. I cannot describe what it felt like to be awarded a scholarship in the name of such a prominent person for all Armenians and French-speakers and indeed globally. Someone whose music I had listened to my whole childhood, as in probably most Armenian homes. I cannot thank enough the Aurora and Aznavour Foundations for awarding me with this scholarship and for giving me the chance to come to UWC Dilijan, to live and learn in such a diversified and rich environment. It is truly a delight to be at UWC Dilijan and a huge opportunity for me to be in Armenia, my place of origin,” says Armen Erzingatzian.

“We are very excited to have the first Charles Aznavour Scholar. The Aznavour Foundation’s mission is to support the field of education and young people in fulfilling their dreams and potential. This annual scholarship will open new opportunities for those who believe in the power of education and wish to become a member of the UWC family,” says Nicolas Aznavour, co-founder of the Aznavour Foundation.