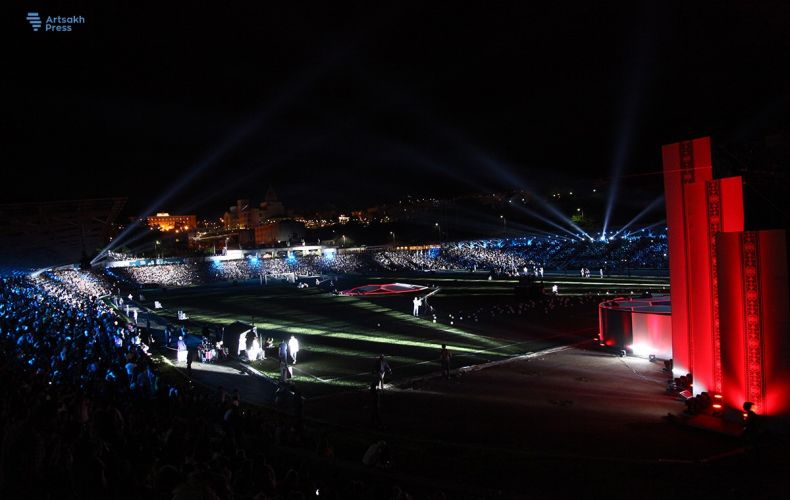 It was full of colors and sounds: numerous song and dance ensembles, musicians, performances and many more lit up the stage for the CONIFA Euro 2019. The motto of the championship is “Open Doors, Strong Goals”.

The participants for the championship– Abkhazia, Chameria, Padania, Szekely Land, Western Armenia, South Ossetia, Sapmi and Artsakh, entered the stadium one by one in a ceremonial introduction.

Afterwards the anthem was played.

President of Artsakh Bako Sahakyan  in his opening speech said:  “Numerous guests, including state officials, from different countries across the world have arrived in Artsakh. I would like to welcome the President of brotherly South Ossetia Anatoly Bibilov, CONIFA President Per-Anders Blind, CONIFA Europe President Alberto Rischio and note that it is a great honor for us to host you in Artsakh. This is the first time that this kind of an international sports event is taking place here. Massive and painstaking work has been carried out to organize the championship properly. I hope that both athletes and fans will be satisfied with the games. Sports, especially football, is one of the unique areas that must unite populations and people, strengthen friendship and mutual respect between them, contribute to establishment of relations and much more. Sports doesn’t know boundaries and restrictions, discrimination and double standards.”

Bako Sahakyan expressed his gratitude to everyone who had contribution in organizing CONIFA Euro 2019.

CONIFA President Per-Anders Blind delivered remarks: “Today the capital city of Europe is Stepanakert. One of the guiding principles of CONIFA is the freedom to play football; it is an arena which opens a unique window towards the big world.

This arena enables us to show the world the greatness and beauty of our peoples, our culture, our national identity and heritage. Millions from around the world will watch this championship,” said Blind.

The ceremony was completed with fireworks.