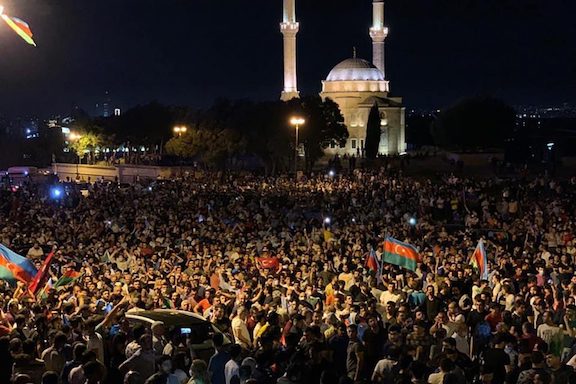 (Asbarez)- Death to Armenians” and “Order Us to Go to War” were some of the slogans being chanted on Tuesday night in Baku’s main Azadliq (Liberty) Square where thousands of protesters were demanding an all out war with Armenia, after 11 Azerbaijani soldiers, among a them a high-ranking general, were killed during three days of fighting after Azerbaijani forces attempted to breach the border with Armenia at Tavush Province on Sunday.

Observers are describing the Wednesday rally as one of the largest in Azerbaijan. The Turan news agency estimated the crowd to number at 50,000 who are angry at the losses suffered by Azerbaijani forces at the border and were calling for the government to declare war.

Before the protest was dispersed by police, a number of demonstrators briefly occupied the parliament building.

The lasted well into the early hours of Wednesday morning. Demonstrators chanted a number of pro-war slogans, including: “End the quarantine, start the war,” “order us to go to war,” “Hey soldier, get up and cross that border” and the tried and true Azerbaijani slogan: “Death to Armenians.”

In addition to chanting pro-war slogans, the protesters also called for the resignation of Najmaddin Sadigov the long-serving Armed Forces Chief of Staff and Deputy Defense Minister.

The demonstration comes as reports were confirmed that Azerbaijani units had surrounded their own villages on the border and were using civilians as human shields in their advance toward the Armenian border.

According to Azerbaijani media, a smaller gathering of several thousand people rallied in nearby Sumgait, where the body Major-General Polad Gashimov, the high-ranking Azerbaijani official killed on Monday, was due to arrive. Gashimov is reportedly the highest ranking member of Azerbaijan’s armed forced to be killed in combat since Azerbaijan broke away from the USSR.

Government officials arrived at the rally to try and calm the crowd, seemingly to no avail. At one point, protestors apparently overturned a police vehicle.

In the early hours of Wednesday, riot police moved in and began to disperse the crowds with batons and water cannons, making numerous arrests. Tear gas was also reportedly used. Reportedly, some 100 people were arrested.