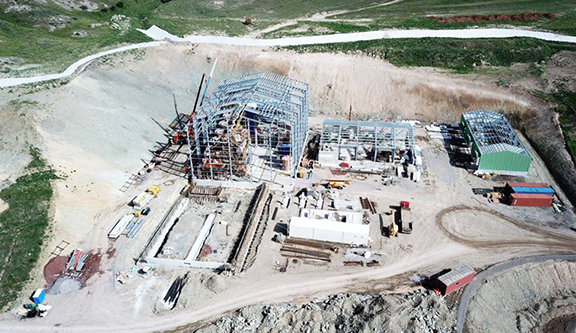 Anti-mining protesters clash with police over the weekend.

(Asbarez),- Despite days of growing protests against a mining project in Amulsar, Prime Minister Nikol Pashinyan on Monday said his government will allow the Lydian International to move forward with mining gold, claiming that the mining operation will raise Armenia’s environmental standards to “unprecedented levels.”

Since the beginning of the Amulsar mining project, residents of nearby Jermuk, a resort town known for its mineral waters and natural springs, and surrounding areas have protested the effort, raising concerns about the environmental hazards of the operation and the impact it will have on Armenia’s natural resources, the residents and the drinking water.

While all roads leading to Amulsar have been blocked by residents since June of last year, Jermuk residents were joined by environmental activists beginning on Wednesday to protest the findings of an independent study commissioned by the government which concluded that the mining project did not pose significant environmental risks to the region, its habitat and its residents, specifically Jermuk and Lake Sevan.

When local residents blocked the roadway to Amulsar in June, 2018, Lydian International, the British-American joint venture, threated legal action, which led the government to hire a Lebanon-based environmental consulting firm, ELARD, to conduct an environmental impact study of the mining. At the same time, Armenia’s Investigative body launched a criminal probe of the government agency that green lit the project under the previous regime.

Protests against the Amulsar mining project have been growing

The Amulsar project, which could be deemed as one the largest foreign investment efforts implemented in Armenia, began in 2016, with Lydian claiming that it has spent more than $400 million in preparation for the actual mining and dismissing environmental hazard concerns. Pashinyan’s government said that it would wait for the report to make a decision.

The conclusions of the report were released on by Armenia’s top law enforcement official Hayk Grigoryan during Thursday’s cabinet meeting.

Summing up the results of the 200-page report prepared by ELARD, Grigoryan said that audit had found that the underground water at Amulsar has no “physical connections” with Jermuk’s water sources, or, for that matter, canals or rivers that flow into Lake Sevan, saying that the lake could be contaminated with “insignificant” toxic waste in the event of a powerful earthquake.

According to Grigoryan’s briefing, the greater environmental risks to other rivers flowing through the Vayots Dzor Province, where Amulsar is located, may be minimized by Lydian enacting “mitigating measures” outlined in the ELARD report. Grigoryan claimed that Lydian has signaled its readiness to take all steps necessary.

In light of the report, Grigoryan also said that the agency, which originally gave the green light to the project in 2016, will not face charges.

“We are relieved that the Audit Report has been made public, as the Government of Armenia has repeatedly conditioned Lydian’s ability to advance the Amulsar Project on its results,” Lydian’s interim chairman and chief executive, Edward Sellers, was quoted in a statement as saying after the release of the ELARD report.

“We look forward to reading the full text of the Audit Report and are confident it will confirm Lydian’s prudential approach to environmental stewardship,” Sellers added.

Over the weekend, protesters clashed with law enforcement officers who arrested six people from the growing number of demonstrators. Pashinyan held several consultations on Monday, including a closed-door session with his ruling “My Step” faction on Monday, following which he took to Facebook to explain to the people the rationale for his decision to green light the Amulsar project.

”In the event that Amulsar is developed under existing conditions, it will be developed under unprecedented environmental standards for the Republic of Armenia,” said Pashinyan on Monday adding that the so-called high standards would force other mining companies to reform their practices.

“Now the government has to go to the low-level mines and tell them that they should elevate their operations to [comply with] the new standards. This is a political obligation,” Pashinyan said Monday. “Now the companies that are operating in lower levels will be forced to spend tens of millions of dollars elevate their standards and the government has the levers to force those companies to do so.”

Meanwhile, a group called the International Federation of Human Rights issued a report Monday saying that the ELARD report “while providing additional interesting and useful information, cannot be considered in any way a simple ‘green light’ to the company to pursue its operations in Amulsar region.”