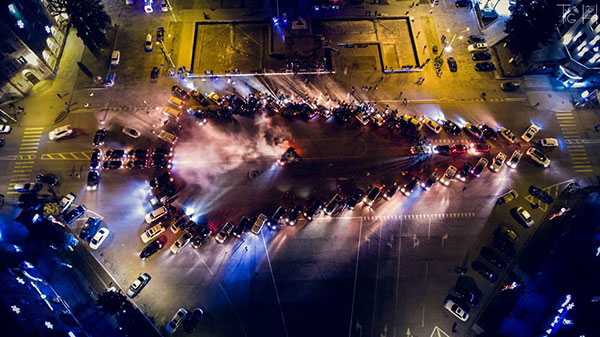 “Aravot”,- It was recently the first anniversary of the creation of the Drivers of Vanadzor group, and so, its members decided to celebrate in a unique way. Over 60 drivers gathered to create a Christmas tree using their cars. For several hours, drivers also performed on Hayk Square.

Vanadzor was the second city after Yerevan to have come up with such an initiative. “A similar event was carried out in Yerevan last year, and we decided that we wouldn’t stay behind. We also took into consideration the fact that Vanadzor was declared the capital of youth, so we decided to organize a large event in order to change the manner in which events are held in Vanadzor, as well as to establish a new wave in event organization,” group founder Andranik Hovhannisyan told Aravot.

Thanks to the group, many drivers were able to resolve issues in connection with their cars over the past year, as well as resolve several issues regarding driving throughout the city. “We consider this to have been an effective year. We have held several large events and sales this year, we have raised several issues that have remained at the center of our attention regarding roads, driving, signs, and traffic lights. City and regional authorities also allowed us to have positive results.”

Female drivers also played a role in creating the Christmas tree. Member of the Female Drivers’ Club Naira Nersisyan said that, unlike in previous years, women play a more active role now in events. “We have involved women, but not completely, because some have issues with shame and their mentality. Perhaps they do drive, but they don’t participate in such events. We try to teach both male and female drivers discipline, and sometimes it works, sometimes it doesn’t. That discipline has also united people here. Women participated less frequently in the past, but now they are more involved.”

The day ended with a fireworks show.