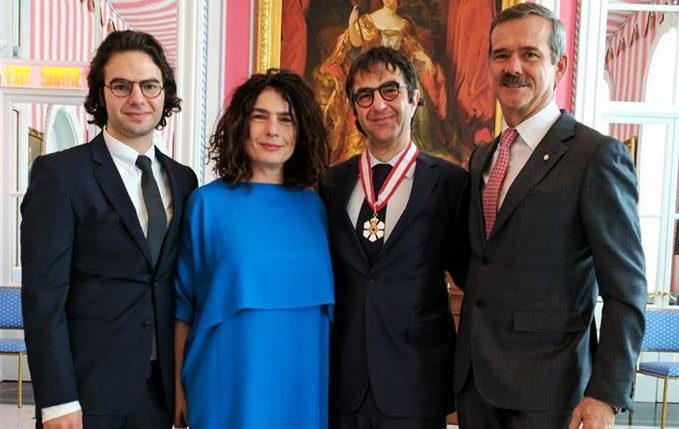 (A.W.)—On Feb. 17, world-renowned Canadian-Armenian film director Atom Egoyan was invested as a Companion of the Order of Canada—one of the highest honors the Canadian government bestows to its citizens—by David Johnston, Governor General of Canada.

Egoyan was named an Officer of the Order of Canada in 1999, and his promotion to a Companion of the Order was announced in Dec. 2015.

“Atom Egoyan is committed to the development of homegrown talent and a vibrant cultural industry. One of our cultural treasures, he has built an international reputation as a filmmaker while remaining firmly rooted in Canada. His outstanding body of work often focuses on the themes of community, isolation and the role of technology in our lives. Generous with his time and talent, he serves as a mentor and teacher, and as an active member of cultural boards and film festival juries. He is also a talented visual artist and director of both theatre and opera,” read the citation that was presented during the ceremony.

Born in Cairo in 1960, Egoyan was raised in Victoria, British Columbia, Canada. He moved to Toronto to study at the University of Toronto’s Trinity College. Egoyan is considered one of the most celebrated contemporary filmmakers on the international scene. He has won numerous prizes at international film festivals including the Grand Prix and International Critics Awards from the Cannes Film Festival, two Academy Award nominations, and numerous other honors. His films have won twenty-five Genies—including three Best Film Awards—and a prize for Best International Film Adaptation from The Frankfurt Book Fair.

Egoyan has also been knighted by the French Government, received State Honors from The Republic of Armenia, and has received ten Honourary Doctorates in Letters and Laws from universities including Trinity College of the University of Toronto, Queens University, the University of British Columbia, and McGill University.

Created in 1967, the Order of Canada recognizes outstanding achievement, dedication to the community, and service to Canada. Close to 7,000 people from all sectors of society have been invested into the Order. Their contributions are varied, yet they have all enriched the lives of others and have taken to heart the motto of the Order: Desiderantes Meliorem Patriam (“They desire a better country”). The three tiers of the order are Companion, Officer, and Member; specific individuals may be given extraordinary membership and deserving non-Canadians may receive honorary appointment into each grade.