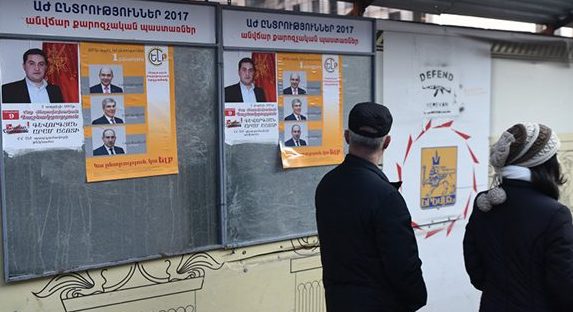 Yelk bloc will run for parliament under the slogan “Election, change, victory.” They pledge to be innovative, to offer new solutions in the campaign, to be open and transparent.

The alliance has decided to campaign in different regions of Armenia simultaneously. Edmon Marukyan, who leads the party list, will campaign in the northern provinces of Aragatsotn, Lori, Tavush and Shirak, Aram Sargsyan will work in the southern provinces of Armavir, Ararat, Vayots Dzor and Syunik. Nikol Pashinyan will mostly be in Yerevan, while Sasun Mikayelyan will travel to Gegharkunik and Kotayk.

Free Democrats have chosen the slogan “We can.” At a convention that marked the start of the campaign the party presented its election platform.

Ex-Prime Minister Hrant Bagratyan, who sits second in the proportional list, referred to the hard social-economic conditions in the country, which ‘have led to large-scale migration.’

“Don’t rely on someone to come, invest in the country and develop its economy. You have to develop Armenia. China’s example is instructive,” Bagratyan said.

The Armenian Renaissance Party urges to “Vote for change, vote for renaissance.” the party chose to start the campaign with a press conference.

The party will present the provisions of its platform to voters separately. The Armenian Renaissance has prepared videos that will introduce to the 30 points of the party’s program.

Tsarukyan alliance says it’s “Time to change and build.” The bloc started the campaign from the borderline Tavush province. Divided into ten groups, members of the alliance traveled to different settlements of Tavush to deliver their messages to people.

Before the start of the campaign member of the bloc Varuzhan Babajanyan had reported pressures against their activists. Speaking to Public Radio of Armenia, Babajanyan said “all issues have been settled.”

The Republican Party of Armenia says it has the answers to the issues people are concerned with. “Elections meeting the letter and spirit of law will be the victory of all of us,” Prime Minister Karen Karapetyan said at the start of the campaign.

The party, which has chosen “Security and Progress” as its slogan, considers they will be able to present their programs and outlook to people during the campaign.

The Communist Party of Armenia, which has chosen the “Motherland, labor, socialism” as its slogan, started the campaign from Tavush province.

The party aims to restore socialism in Armenia and intends to deepen the political, economic and cultural ties with Russia.

The Ohanyan-Raffi-Oskanian alliance will campaign under the slogan “Heritage, unity, victory.” Ex-Defense Minister Seyran Ohanyan says they are coming to form a new-quality leadership and restore the faith of the public. He also promises to fight all problems.

Head of the ARF faction Armen Rustamyan, who heads the party list, says the upcoming elections will be unprecedented in Armenian history.

“While others are speaking about changes, we’re bringing about these changes,” ARF faction secretary Aghvan Vardanyan said at the start of the campaign.