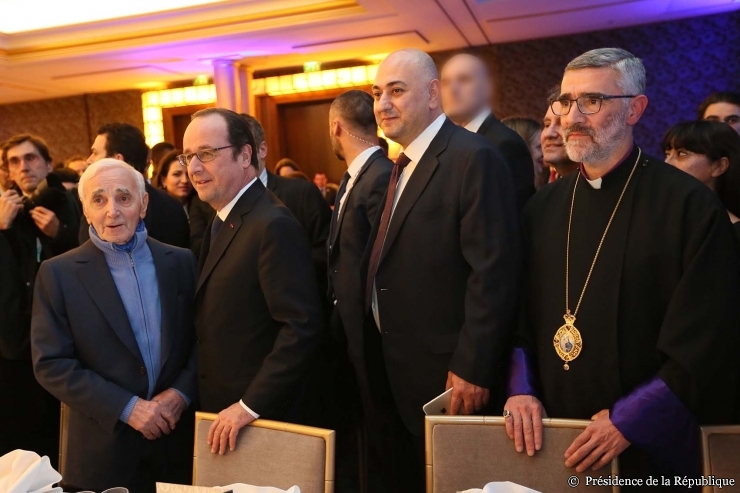 (A.W.)— French President Francois Hollande attended an annual dinner with the Coordinating Council of Armenian Organizations of France (CCAF) for the last time as President of France on Feb. 9.

During the dinner—which was also attended by the Armenian Prelate of Syria Archbishop Shahan Sarkisian and world famous French-Armenian crooner Charles Aznavour—President Hollande addressed several issues, including the decision of the Constitutional Court to revoke certain amendments concerning the criminalization of genocide denial, French-Armenian relations, the issue of Nagorno Karabagh (NKR/Artsakh), and genocide recognition.

“To deny the massacres of yesterday is to authorize the massacres of today,” Hollande said. “I welcome the quality of the work of Jean-Paul Costa, which was the basis for an amendment during the debate on the Equality and Citizenship Act,” said Hollande, reported France’s Nouvelles d’Armenie.

He then detailed plans launched last October by French Education Minister Najat Vallaud-Belkacem to look for measures to institute a day of national commemoration of all genocides, war crimes, and thus the Armenian Genocide.”

Hollande added how Armenian President Serge Sarkisian will be visiting Paris next month, after accepting his invitation to honor the 25th anniversary of diplomatic relations between France and Armenia. He explained how the meeting will provide an opportunity for the two countries to discuss economic and cultural cooperation, as well as the NKR conflict.

“France bears special responsibility for the issue as a Minsk Group Co-Chair country together with U.S. and Russia,” Hollande said about the Artsakh conflict. “We have to launch real talks aimed at the conflict resolution.” Hollande stressed that the ceasefire is not a satisfactory solution and that the conflict should be solved based on the right to self-determination.

Lastly, he stressed the contribution of French Armenians to the French Republic. He told those in attendance that Armenians are some of the “best” citizens of France. “Even beyond the month of May, I will always be at your side, as I have always been,” Hollande concluded. “I will not have the same responsibility, but I will have the same conviction.”