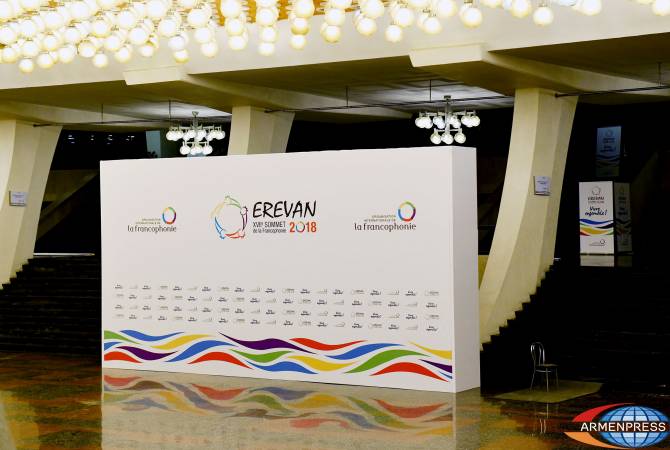 The 35th OIF Ministerial Conference will take place on October 8-9. The official opening of Francophonie Village at the Freedom Square is scheduled on October 9, where the participant countries and partners of the OIF will have the opportunity to display the cultural and language diversity of their countries.

The 47th session of the International Francophone Press Union will take place on October 9-12 in Tsakhkadzor. The topic of this session will be “Press and migration”.

In the sidelines of the 17th summit of the Francophonie an economic forum will be organized for the first time on October 10 at Tumo center for creative technologies.

A gala concert will be held at the Republican Square on October 11 at 19:30 the final part of which will be dedicated to world famous chansonnier Charles Aznavour.

The 17th summit of the Francophonie will be held on October 11-12. The election of Secretary General of the organization is on the agenda. The Summit will be held under the theme of “Living Together”; “Living together, respecting solidarity, humanistic values and diversity as the basis for peace and prosperity in the francophone area.” Pomegranate has been chosen as the logo of the summit, symbolizing peace and prosperity in the entire Francophonie area.

OIF organizes political activities and actions of multilateral cooperation that benefit French-speaking populations. Its actions respect cultural and linguistic diversity and serve to promote the French language, peace and sustainable development. IOF has concluded 33 cooperation agreements with international and regional organisations and has established permanent dialogue between the major international linguistic zones (the English, Portuguese, Spanish, and Arab-speaking zones).

The IOF has its head office in Paris as well as four permanent representations in Addis Ababa (at the African Union and at the United Nations Economic Commission for Africa), in Brussels (at the European Union), in New York and in Geneva (at the UN). It has three regional offices (West Africa ; Central Africa and Indian Ocean ; Asia-Pacific) located respectively in Lomé (Togo), Libreville (Gabon) and Hanoi (Vietnam) and two regional antennas in Bucharest (Romania) and in Port-au-Prince (Haiti). Alongside the IOF, the Parliamentary Assembly of La Francophonie and the four direct operators are responsible for implementing the programs decided at the Summits.