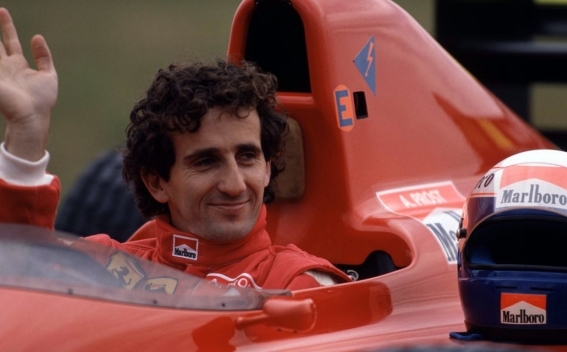 Alain Prost, picture by` Stoneforest.ru.
(Armedia)-“My mother is Armenian; we spent all our childhood with my grandfather, who told us various stories about Armenia. When you are only 10 years old – these are just stories. You realize their real meaning a bit later. Today, these stories are an integral part of my life. I do not speak Armenian, but I am Armenian, and this is the most important thing “, – racing driver and a four-time Formula One Drivers’ Champion Alain Prost said.

Alain Prost was born on 24 February 1955, near the town of Saint-Chamond in the family of André Prost and Marie-Rose Karatchian, born in France of Armenian descent. Alain’s younger brother Daniel died of cancer in 1986. Although short, Prost was an active, athletic child, who enthusiastically took part in diverse sports, including wrestling, roller skating and football. Prost did everything in the sake of victory, and in doing so he broke his nose several times. That is how his nose got the form, which in the future became famous to the whole world. Alain considered careers as a gym instructor or a professional footballer before he discovered kart racing at the age of 14 while on a family holiday. The boy once and forever fell in love with the speed and roar of the motors and later from the kart driver became the greatest Formula One champion.

Alain is a four-time World Formula One Drivers’ Champion  (1985, 1986, 1989, 1993). In the late 1980s and early 1990s, Prost set a number of records and only Michael Schumacher managed to break them a decade later. Alain Prost was awarded the Légion d’Honneur by President François Mitterrand. The most striking period in Alain Prost’s career was during his rivalry with Ayrton Senna, who is the McLaren Formula One team member. But despite the scandals and quarrels caused by this rivalry, by the end of the career, the two champions had completely neutral relations. Senna once said that Alain “… always sought to be at the peak and even higher.”

Alain Prost had three nicknames at once. Initially, in 1986, Alain was nicknamed the “Calculator” due to the exact calculation of the fuel consumption at the San Marino Grand Prix. Because of the empty tanks of Keke Rosberg’s car his teammate Alain Prost led the race. Alain had to work hard to have enough fuel in his car to reach the finish. Later, this calculations and intellectual approach to racing earned him the nickname ‘The Professor’. But the completely innocent nickname “Clown” became offensive for Prost after Senna’s fans began using it for insulting him.

In 1997, Prost bought the Ligier team and renamed it “Prost Grand Prix”. The team has not achieved any serious success. Many connect this to the fact that Alan is soft-hearted and such work needs rigidity and even cruelty.

Alain Prost is married; he has two sons and a daughter. The eldest son Prost Nicolas is a racing driver, too. Alain Prost has always identified himself as Armenian. In March 2007, he was awarded the “Armenian Cesar”, which is considered the highest award of the Armenian community of France. Today Prost is one of the most prominent and active representatives of the Armenian Diaspora. He also remains “the fastest Armenian of the world.”