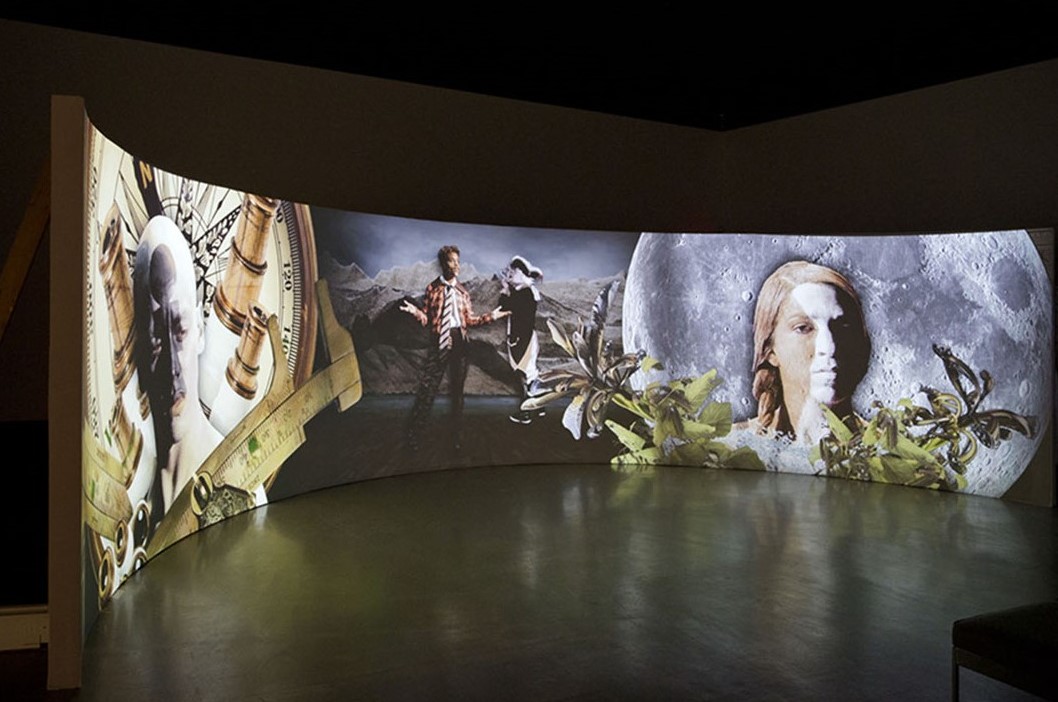 A scene from RESORT Installation, 2016.

Matilda Aslizadeh is a visual artist based in Vancouver, British Columbia. Throughout her career, she has developed a dense visual language, utilizing multiple media forms. Matilda uses her art to challenge and reexamine dominant narrative structures that persist within Western culture. Her most recent work, RESORT, navigates the relationships between land and capital.

Q- Fledgling buds of ideas can sometimes blossom and mature into something completely different than the initial concept they started as. Is there a conscious choice made between harnessing these shifts or just letting them go wild and going along with the ride?

A- I spend a lot of time thinking about my projects, choosing which ideas to actually execute, and planning the production. Once I begin in earnest, it rarely turns out to be radically different than what I envisioned. I think that puts me on the side of harnessing the shifts as opposed to going along for the ride.

Q- Being a visual artist that uses multiple media forms, I wonder if you’ve always felt a sense of comfort with having a variety of avenues to share your viewpoint, or if that is something that you grew to use, as it better suited your developing perspective.

A- I am certainly more comfortable using some media as opposed to others, but in general this sense of ease with multiple media is a product of how artists have been educated in Europe and North America for at least the past 50 years: there is an emphasis on concept over craft. In other words, the idea arrives first and then is developed in the medium/media deemed most appropriate to communicate it. This approach is very different to the traditional approach of learning the ins and outs of a particular material practice like painting.

Q- Does being involved in projects like designing the Armenian genocide memorial in Vancouver provide you with a distinct form of fulfilment?

A- Yes, absolutely. Being an artist or academic has historically been quite a solitary job, though this has shifted in recent years, and many contemporary artists actually include collaborating with communities of various types in the fabric of all their projects. I always like to be engaged in some creative practice that is community-centred in addition to my own independent projects. In addition to the Genocide memorial project, I also served for many years on the Board of Directors for VIVO, an artist-run media centre in Vancouver and I’m currently a part of a collective of artist mothers -called art/mamas – working to support each other and raise awareness of the difficulty of participating in art world networks as a mother.

Q- Once upon a time, aspiring photographers would press down on the shutter conservatively; conscious of the attention and commitment, the literal time in the dark, developing each image required.  Today’s impressive digital arsenal has completely changed this form of expression; much more accessible, but perhaps less contemplative.  Which side of the coin do you find yourself?

A- I am old enough to have lived through transformation from film to digital photography and there was certainly something very meditative about working in the darkroom “with your hands” so to speak. But in general I think the state of contemplation that you describe has less to do with the particular technology and more to do with the sense of craft that I mentioned earlier. Despite the emphasis on ideas that has been prevalent, I do think it is the sense of craft or deep engagement with materials (whatever they may be) that produces a contemplative state and a pleasure in making that is so important.  So I suppose I find myself using the digital in a mode more characteristic of the analogue. My computer transforms itself into a metaphoric darkroom when I begin to assemble and edit all my imagery it and I do think of this process as the closest I get to “craft”.

Q- Some of the courses you have taught at the post-secondary level include digital media and critical theory. What distinction or challenges do you find between creating yourself, and engaging with the entire artistic process and teaching others to create or guiding them through their own artistic journey?

A- It is indeed a tricky thing to balance teaching with making. In terms of time, I can rarely do both at once and will usually teach during the academic year and make most of my own work during the summer. However, the relationship between teaching and making can turn into a virtuous circle in the best of times: for example, my own research can push me towards developing an assignment for students and then the way that assignment is approached by students can give me ideas to take back to my research. I mostly teach 1st year University students so I really only see them at the beginning of their journey, and I spend that first year throwing ideas and processes at them. To return to my earlier comment on art education, now there is a greater emphasis on interdisciplinarity and the idea of generating ideas through combining different mediums- I feel very at home in this context.

Q- Without oversimplifying, your latest work deals with a fictionalized narrative set on an isolated tourist resort. One of the objectives of RESORT is to ponder the price of an exclusionary paradise. How much, if any, of your own story telling approach comes from being born Armenian: a tribe of people with their own complex relationship with land and the concept of belonging.

A- I think my background certainly influences my approach. In essence, Resort is a critique of the concept of ideal spaces (Paradise, Utopia, gated communities etc.) and an assertion that this idealization of abstract space inevitably produces violence. Armenian history, in relation to land and territory, can be viewed through the lens of being enmeshed in other cultures’ narratives of what an ideal space is, who it includes and excludes, and how those that remain inside have to behave. The latter dynamic is very similar to the colonial one which I explicitly reference in Resort.

Q- One major factor of a modern Armenian, disaporan identity is the great ease at which we are able to access Armenia, and especially Yerevan, as a tourist destination.  Tying into the themes you discuss in RESORT how do you feel about this commercialized, tailored and sanitized experience of the homeland so many have every July and August.

A- This is a wonderful question but one I can’t directly address since I have yet to go. I can only imagine that the situation is parallel to other hubs of tourism. Often people refer to these tourist spaces as unreal or “fake” in relation to the “real” spaces that most tourists do not explore. For example, one might say that tourists do not experience the “real” Armenia. I think this opposition between real and unreal is misleading since the tourist industry itself is very real, and has a material impact on everyday lives of Armenian citizens, for better or worse. Also interesting is how that industry reflects back upon us the narrative we want, like a mirror image. To answer your question (finally), I feel that this commercialized and sanitized version of Armenia is probably an integral part of a far more complex society and I guess it is up to the individual if they want to recognize and acknowledge that complexity.

Q- A sense of vigilante justice has been quite present in our collective Armenian narrative; experiencing the most extreme violence and countering it with our own tailored brand of it. Can you comment on the feeling of both being completely victimized by this violence but also being somewhat prideful when it has a positive impact on our collective psyche.

A- I think that while there can be collective narratives, they are rarely homogenous. When I look at the narrative of the Armenian Genocide and its aftermath, I see it less as a cycle of complete victimization followed by individual acts of heroic justice in retribution, and more as a series of small, persistent gestures of resiliency by members of a community that built itself back up through everyday acts of existing in the world despite violence. The latter narrative is what makes me proud.