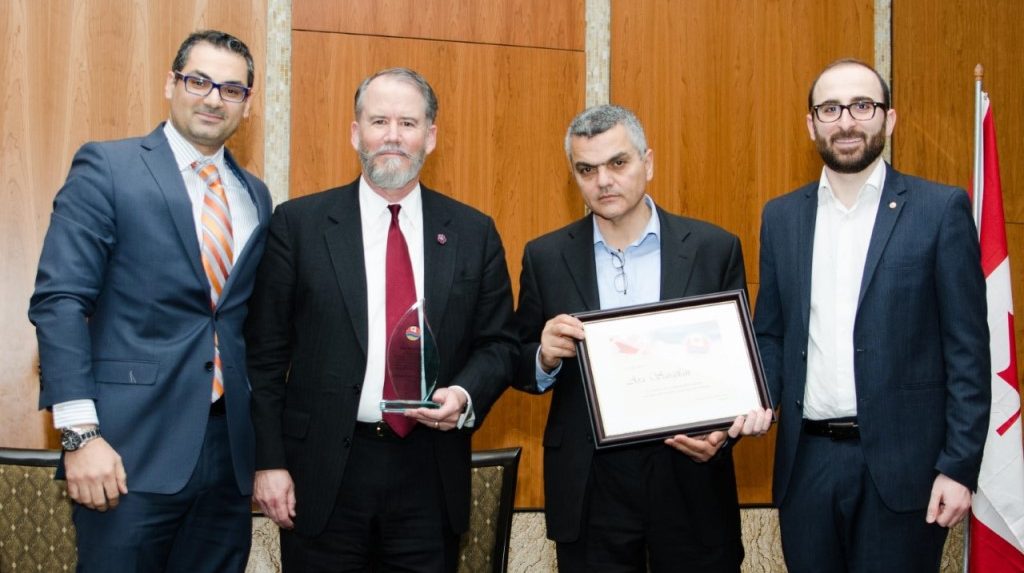 TORONTO – John Evans, former U.S. Ambassador to Armenia, and Ara Sarafian, Director of the Gomidas Institute, presented Truth Held Hostage: America and the Armenian Genocide – What Then? What Now? in Toronto on March 12, 2017. The book was written by Evans and published by the Gomidas Institute in 2016. The program was structured as a panel interview between Evans, Sarafian and moderator Zohrab Sarkissian, Chairperson of the Armenian National Committee of Toronto (ANCT). They discussed Evans’ experiences as the former U.S. Ambassador to Armenia and discovering the taboo subject of the Armenian Genocide with the State Department, the importance of writing and publishing the book, and commented on current international relations as they relate to the politics of Armenian Genocide recognition.

A veteran of the U.S. Foreign Service, Evans gained notoriety in 2005 by publicly dissenting from the stated policy of the Bush and previous Administrations and using the term genocide to describe the Armenian Genocide. He was dismissed from his post as a result. Attendees of the event in Toronto (Photo: Ishkhan Ghazarian)

During the discussion, Evans spoke about his decision to speak truthfully about the genocide during his ambassadorship as vital since it is a well-established historical fact, and as a US official, he could not deceive the citizens of the country he served. His eventual divergence from State Department policy created an “awkward” situation for them, noted Evans, as he did not immediately resign to minimize the ensuing fallout with Turkey and resulting public awareness.

Evans remarked the global community has to join the 24 countries that have already recognized the Armenian Genocide to encourage discussion of the issue and acceptance within Turkey.

Sarafian discussed the importance of publishing books such as Truth Held Hostage, commenting that the Gomidas Institute is an academic institution, and as such, research and publish volumes vital to educating and promoting to the public issues of importance to Armenians, including the Armenian Genocide.

He also stressed the importance of promoting democracy in Turkey to allow for education and necessary discourse on the Armenian Genocide to take place.

“Democracy in Turkey, it does matter. Because if Turkey becomes a democratic state, it allows us to engage Turkish populations [on the Armenian Genocide], and ultimately, that’s the best peaceful way of getting our message across there,” said Sarafian.

“The truth cannot be held hostage,” Sarkissian concluded on behalf of the ANCT, “and the courageous and dedicated work of John Evans and Ara Sarafian must be emulated by all those who are in the position to challenge injustices and unfair political influences.”

The event was organized by the Armenian National Committee of Toronto and Hamazkayin Armenian Educational and Cultural Society “Klatsor” Chapter.

The ANCT is a chapter of the Armenian National Committee of Canada, the largest and the most influential Canadian-Armenian grassroots human rights organization. Working in coordination with a network of offices, chapters, and supporters throughout Canada and affiliated organizations around the

world, the ANCT actively advances the concerns of the Canadian-Armenian community on a broad range of issues and works to eliminate abuses of human rights throughout Canada and the world.