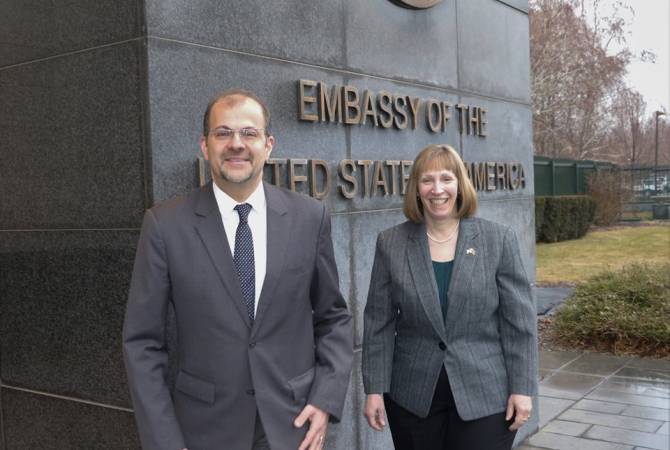 Lynne Tracy was sworn in as US Ambassador to the Republic of Armenia on February 19. She is a career member of the Senior Foreign Service. Most recently, she served as Senior Advisor for Russia Affairs in the Bureau of European and Eurasian Affairs at the U.S. Department of State. She was Deputy Chief of Mission at the U.S. Embassy in Moscow, Russia, 2014-2017.

“Following a year of peaceful political transition and democratic progress in Armenia, the Armenian National Committee of America looks forward to working with Ambassador Tracey in the New Year to upgrade U.S.-Armenia strategic relations,” stated ANCA Executive Director Aram Hamparian at the time of her confirmation. “We look to our new ambassador in Baku to forcefully challenge Aliyev’s anti-Armenian violence and openly confront his regime’s worsening crackdown on domestic dissent.”

Tracy’s nomination was confirmed by the U.S. Senate on January 2, and it came in the wake of intense questioning by Senators Bob Menendez (D-NJ) and Ed Markey (D-MA) regarding the U.S. policy of complicity in Turkey’s obstruction of justice for the Armenian Genocide. Ms. Tracy, while stating that “The Trump Administration and I personally acknowledge the historical facts of what took place at the end of the Ottoman Empire – of the mass killings, the forced deportations and marches that ended 1.5 million lives and a lot of suffering,” stopped short of properly characterizing the crime as genocide.

Her other senior leadership positions include Deputy Assistant Secretary for Central Asia in the Bureau of South and Central Asian Affairs at the Department of State, 2012-2014, and Deputy Chief of Mission at the U.S. Embassy in Ashgabat, Turkmenistan, 2010-2011. Tracy was the Principal Officer at the U.S. Consulate in Peshawar, Pakistan, 2006-2009, where she was awarded the Secretary’s Award for Heroism. She was also the Principal Officer at the U.S. Embassy Branch Office in Astana, Kazakhstan, 2004-2006. Other overseas assignments include the U.S. embassies in Kabul, Afghanistan, and Bishkek, Kyrgyzstan. She worked in the Office of the Special Envoy to the Newly Independent States at the Department of State in 2000-2001.