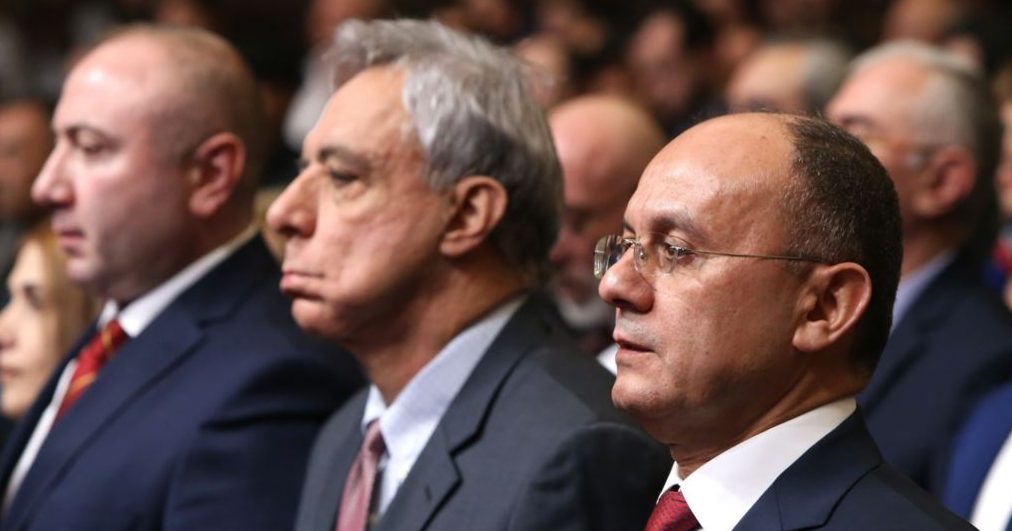 An alliance led by former Defense Minister Seyran Ohanian on March 17 claimed that President Serzh Sarkisian’s Republican Party of Armenia (HHK) will lose power as a result of the upcoming parliamentary elections.

It also said that Armenia’s leading opposition forces should already formally pledge to form a “government of national accord.” The proposal met with skepticism from other major opposition contenders in the elections scheduled for April 2.

In a statement, the ORO bloc co-headed by Ohanian and former Foreign Ministers Vartan Oskanian and Raffi Hovannisian said only “two weeks remain until the end of HHK rule.” Armenians are fed up with “systemic corruption” and pre-election violence and want “radical reforms,” it said.

The statement added that ORO is ready to sign a joint declaration with other opposition contenders on a post-election power-sharing deal that will exclude the HHK.

Armen Martirosian, a senior ORO figure, explained that such a declaration would commit signatories to not entering into post-election coalitions with the ruling party. “If they don’t sign, they will show that they don’t rule out a coalition with the HHK,” he said.

Naira Zohrabian, a senior representative of another bloc headed by businessman Gagik Tsarukian, voiced skepticism about the proposal, saying that it is still not clear which opposition groups will win seats in the next parliament.

Zohrabian also said: “The Tsarukian Bloc categorically rules out post-election cooperation with one force, the Republican Party, in any format … Gagik Tsarukian has made this clear.”

Levon Zurabian of the opposition Congress-HZhK alliance also described the ORO idea as premature. “I think that it is meaningless to speak beforehand of what he will do or won’t do with other forces, especially given that it’s not yet clear what each political force stands for,” he told RFE/RL’s Armenian service (Azatutyun.am).

Zurabian said the elections will show which nominally opposition groups are genuinely opposed to President Sarkisian. He said Congress-HZhK suspects that some of those groups are allowed by the authorities to hand out vote bribes during the election campaign. He declined to name them.

Aram Sarkisian, a leader of the opposition Yelk bloc, was also unimpressed by the idea of an opposition declaration. “I think that the Tsarukian Bloc would definitely form a coalition with the HHK, rather than other forces, under certain circumstances,” he claimed. “The same is also true for Dashnaktsutyun and Armenian Revival.”

Schiff calls for expanded aid to Artsakh and Armenia