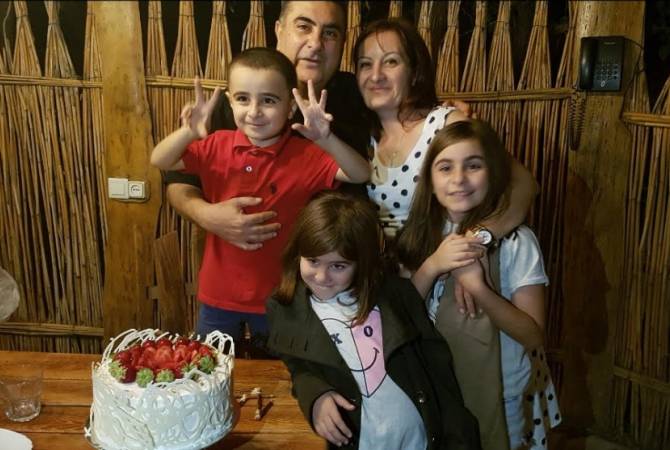 “Armenpress”-“The Kimetlyan family was living in the Australian city of Sydney until June 2018. Alis and Raffi Kimetlyan have three children. Before marriage Alis was living in Armenia, but then she moved to Australia together with her spouse. Raffi grew up in Australia, but he always had the idea to move to Armenia.

“There was a desire, but no action. It was difficult to move to another place with kids as they were small. We were thinking about moving to Armenia, but were not taking any steps”, Alis Kimetlyan tolds.

Raffi Kimetlyan was working in the jewelry field in Australia, then he established his own shop. Alis says they faced no problems, they were living normally, but always with the mind to return to Armenia.

“My husband visited Armenia before and he was always missing his homeland. Although our children were attending educational centers there, had their friends, I as well was working in the kindergarten, but we made a decision to come to Armenia”, she said, adding that the recent domestic political events in Armenia contributed to making such decision.

They came to Armenia in June 2018. The Diaspora ministry provided great assistance to the family in terms of awareness over different matters. Currently their two kids attend the nearby educational facility.

“Initially, we were thinking about what school to choose, but then we understood that there is no need for that. We have selected an ordinary school close to our home and are very satisfied. Children feel good, and the teachers pay enough attention to them”, she said.

At the moment Alis is looking for a job in the field of foreign languages, in particular, English, and her spouse is observing the market opportunities in order to set up his own business.

“When you live abroad, you understand that time that Armenia is different. By coming here you see hope, excitement among the people. I would recommend all those families who think of moving to Armenia to definitely do that. Believe me, the life here is quite different. We need to do so that our kids grow up in an Armenian atmosphere”, Alis Kimetlyan said. She noted that there are numerous rich Armenians in Diaspora who are making investments in foreign countries. According to her, it would be better if some of these investments are directed to Armenia aimed at strengthening the country, contributing to the economic development.

Armenians Head For Snap Elections After Tactical Voting In Parliament