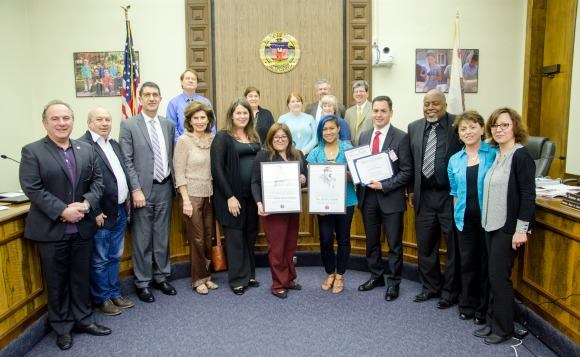 Asbarez – In its annual recognition of the anniversary of the Armenian Genocide, the Pasadena Unified School District’s (PUSD) Board of Education, at its well-attended meeting, issued on March 30 the Genocide Resolution to the attending Armenian National Committee of America (ANCA), Pasadena Chapter’s Board of Directors.

The ANCA, Pasadena Chapter has grown accustomed to the School District’s recognition of the Armenian Genocide, and its esteemed board of Education’s solidarity in standing with the Armenian-American Community in paying homage to the 1.5 million victims, who in 1915, fell prey to the atrocities of the Ottoman Turks. With this being the commemoration of the 102nd anniversary of the Genocide, the world has much to do in correcting the wrongs of the past century in restoring lost Armenian lands, amongst other things, to its rightful owners, the Armenian people.

“For the past 102 years, humanity has not been at a good place when it comes to justice for the Armenians,” expressed Pasadena ANCA Board Member Shahe Jierian. “Humanity has failed us miserably! It’s time the world redeemed itself by acting to restore every lost inch of Armenia’s historical lands to its rightful heirs and exact appropriate punitive measures on the perpetrators of the unspeakable acts committed by the Turks.”

On the occasion of the Board of Education’s issuance of the resolution, Hoori Chalian, the School District’s Director of Innovative Programs, and ANCA Western Region Education Committee Member, conveyed her heartfelt message on the Genocide to the board of education, which was followed by her introduction of three teachers from Pasadena High School to whom she presented award certificates for their invaluable contributions in collaborating to enlightening students on the Armenian Genocide.

The collaborative efforts of Genely Chan, Graphic Arts Teacher, Mayte Hernandez, English Teacher and William Jenkins, Social Studies teacher are highly commendable especially for facilitating an integrated project on Genocide awareness at Pasadena High School this past year. Focusing particularly on the Armenian Genocide, the Social Studies, Art, and English classes collaborated to create a major art installation which included a graphic silhouette of an Armenian Genocide death march, as well as paintings created by students and Haiku poems which expressed their feelings and ideas about the Armenian Genocide. This project encourages student lifelong learning, self- expression as well as learning about genocide effectively.

Proceeds from ‘The Promise’ will create human rights institute at UCLA