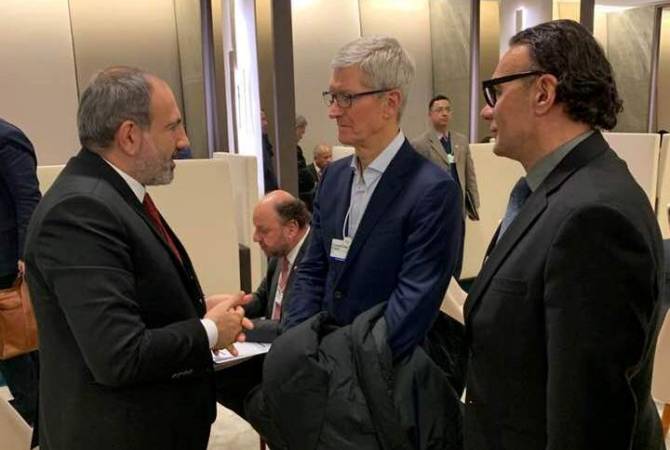 DAVOS, Switzerland—Prime Minister Nikol Pashinyan who is in Switzerland to attend the World Economic Forum met on Tuesday with Apple CEO Tim Cook.

The news of the meeting with Cook was reported by Pashinyan’s chief advisor Arsen Gasparyan who reported about it on his Facebook page, exclaiming, “What a great start at the World Economic Forum in Davos, with perhaps a bit of magic waiting…”.

Pashinyan also met with leaders of Mitsubishi, the Japan International Cooperation Agency and eBay on the sidelines of the Davos summit.

While meeting with Mitsubishi board member Christina Ahmadjian, Pashinyan said that the Armenian government wanted to turn the political revolution in the country into an economic one, adding that real changes were expected in Armenia to achieve that goal.

Pashinyan stressed that Armenia has a huge potential for technological development and added that a cooperation with Mitsubishi Heavy Industries could be promising in this regard.

Ahmadjian emphasized the importance of the processes taking place in Armenia in terms of attracting new programs and expressed willingness to help the Armenian government to establish ties with different Japanese companies. She is going to visit Armenia in the near future to discuss further cooperation.

Pashinyan discussed expanding bilateral cooperation with the Japan International Cooperation Agency during his meeting with the agency’s president Shinichi Kitaoka, who briefed the Armenian leader on the ongoing activities in Armenia.

Kitaoka said that all JICA programs will continue and announced that the agency will be sending a group of experts to Armenia to assess and discuss prospects for further cooperation.

At a meeting with eBay Vice-President Cathy Foster, Pashinyan referred to the company’s e-commerce services, noting that they comply with the ongoing technological transformation.

The Prime Minister added that eBay’s services are of great demand in Armenia and emphasized the need to expand the scope of its activity in the country. Pashinyan discusses prospects for investment in Armenia with Mitsubishi board member Christina Ahmadjian. DataArt eager to establish a center in Armenia

EU, World Bank to Allocate Over €730 Million for Projects in Armenia