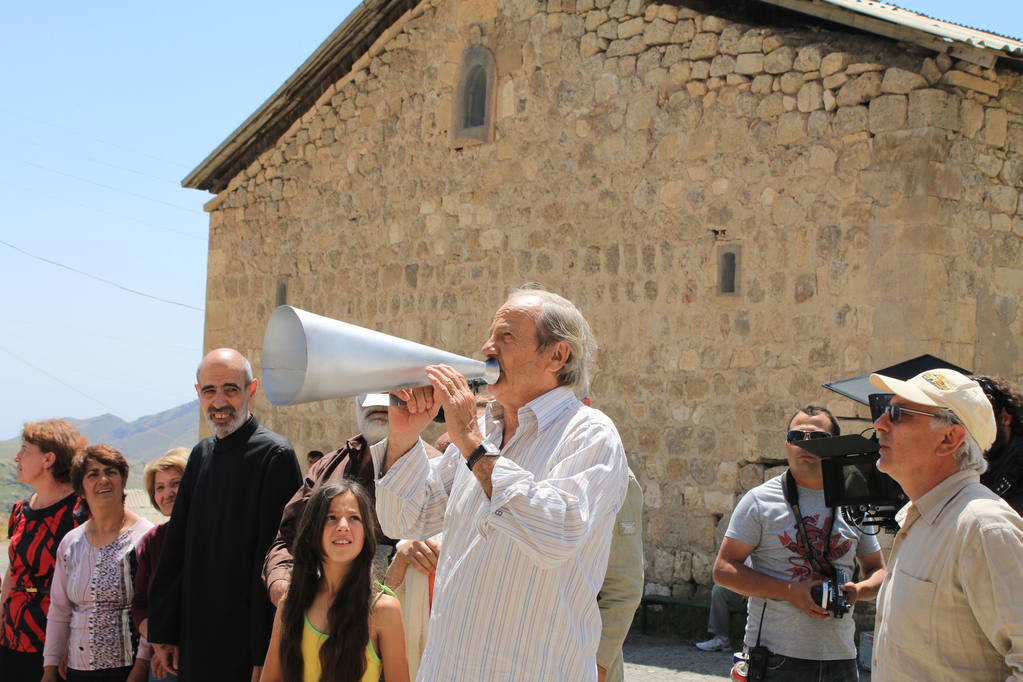 (Toronto)- The 11th season of POM film festival will present 38 films from 14 countries, showcasing different genres and a range of Canadian talent. It is a unique year at the Festival for creative collaboration and films that deal with the trauma of war. The festival will take place in Toronto November 16-20th.

The 11th season of the annual event will commence with a special screening of Earthquake at SilverCity Fairview Cineplex (1800 Sheppard Avenue East) Directed by Sarik Andreasyan (American Heist) and produced by Ruben Dishdishyan (The Cut, Mermaid), this dramatic feature brings to life the catastrophic earthquake of 1988 centred in the town of Spitak, near the city of Gyumri (known as Leninakan during the Soviet era). Scene from the movie ‘Earthquake’.

Atom Egoyan’s Remember will also be screened at the festival’s opening night, Wednesday, November 16th at the SilverCity Fairview Complex. Starring Christopher Plummer in an unforgettable role, the thriller involves a dementia-suffering Holocaust survivor who seeks vengeance against the Nazi war criminal responsible for murdering his family. The film was awarded Best Original Screenplay at the Canadian Screen Awards and Egoyan will be present to conduct an interactive Q&A with the audience following the screening as well as present a new short film titled Acts of Conscience commissioned by the Canadian Museum of Human Rights where he plays the role of the narrator.

Feature films Lost Birds and All That Jam will be screened on Thursday, November 17th, also at SilverCity Fairview Mall. Lost Birds, co-directed by Ela Alyamac and Aren Perdeci, tells the tragedy of the Armenian Genocide through the eyes of a young brother and sister. A historical fairytale set in the backdrop of WWI, the film was shot in scenic Capadoccia and is the first feature film made in Turkey about the Genocide. It will be followed by the light-hearted romantic comedy All That Jam directed by former Muscovite Alexander Andranikian who is now plying his trade in New York City. Andranikian as well as the Turkish film makers of Lost Birds, Aren Pederci and Ela Alyamec, will all be in attendance in order to conduct Q&A’s with the audience.

On Friday, November18th the Festival shifts gears and moves south to the Regent Theatre (551 Mount Pleasant Road) where French director, Serge Avedikian, will present his latest feature, Lost in Armenia, starring Canadian actress, Arsinée Khanjian, and Cesar-winning French actor, Patrick Chesnais. It involves a French comedian who finds himself stranded in a remote Armenian village by the Azerbaijan border and unexpectedly becomes the local town hero. Avedikian and Khanjian will both be attendance to discuss their latest project following this Canadian Premiere. ‎

The Academy-award winning film, Spotlight, by director Tom McCarthy, will follow at the Regent Theatre. A powerful true story about the courage and dedication of a group of Boston Globe journalists who exposed the massive child sex abuse scandal within the Catholic archdiocese. Three time Pulitzer-prize winning author and former Globe journalist, Stephen Kurkjian, will be in attendance for this special screening ‎and will be interviewed by reporter Arda Zakarian following the film presentation.

Ozcan Alper’s, Memories of the Wind, will start Saturday’s film program at the Hamazkayin Theatre (50 Hallcrown Place) on November 19th. Set in the backdrop of World War II, an Armenian intellectual has to flee Istanbul because of the government’s increasing infringements on the rights of its minorities. He escapes to the Black Sea region, where his childhood memories surface and shape the direction of his future. Talented Greek cinematographer, Andreas Sinanos, captures the breathtaking beauty of the region. The film was also selected as part of the prestigious Filmfest Hamburg.

A unique documentary, One Two Three, by Arman Yetitsyan, will follow on November 19th, revealing the lives of lonely seniors and their immersion in art and dance as a way of combating isolation. A series of short films as part of the Festival’s annual Symphony of Film also on Saturday afternoon will showcase the talents of emerging Canadian filmmakers, including Kalen Artinian whose latest film, The Indestructible, was chosen as part of the Shorts Corner at Cannes.

The festive gala soirée will take place on Saturday evening, featuring the Canadian Premiere of Three Weeks in Yerevan. The film stars and is produced by multitalented Los Angeles based artists, Vahe Berberian and Vahik Pirhamzei. The latter is particularly popular within both Toronto’s Armenian and Iranian communities. The gala selection is an enjoyable road movie highlighting the absurdities that arise in the making of a feature film in the capital of Armenia.

The final day of POM XI on Sunday, November 20, will start with Meg Ryan’s Ithaca, which is based on the work of William Saroyan. It is a nostalgic look into the life of a young telegraph messenger who is the only one working in his town to deliver letters during WWII, as most of the men are at war. The film stars Ryan’s son, Jack Quaid, Tom Hanks and Sam Shepard.

Two riveting documentaries will follow. Emmy-award winner, Bared Maronian will present, Women of 1915, exploring the integral role of women during and after the Armenian Genocide. Lebanese director Nigol Bezjian will follow up with his latest film, Temple of Light, about the controversial closure of the historic Armenian Educational facility known as the Melkonian Institute in Cyprus.

Sunday evening’s features include French-Armenian director Levon Minasian’s Bravo Virtuoso, a black comedy about a symphony musician who gets caught up in a world of crime. Anna Arshavetyan’s Good Morning is a poignant drama about the impact of a young father’s memories of Armenia in the ’90s and the future of his family, chronicling the first quarter century of post Soviet life in the independent republic.‎

Head of State, by Hrant Yeritskinyan, has been chosen as the 2016 closing film. A light-hearted comedy about a disgruntled journalist who finds himself running for Presidency of his country. It will be followed by the Festival’s annual Audience Choice and Jury Awards.