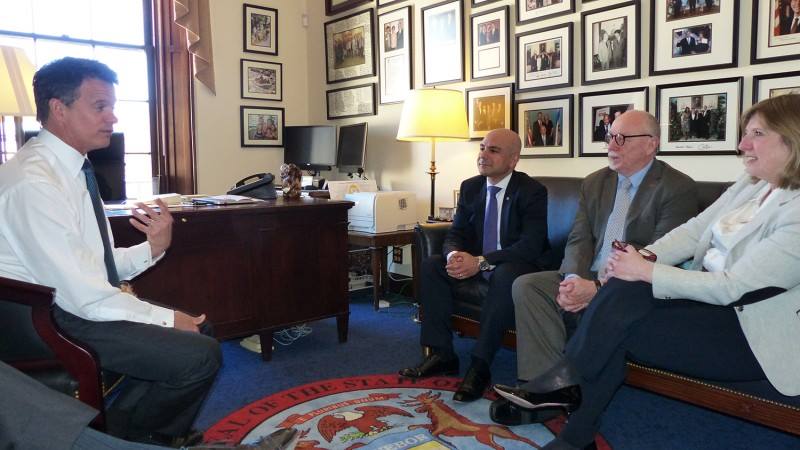 U.S. Representatives David Trott (R-MI) and Adam Schiff (D-CA) on Wednesday joined with their Congressional Armenian Caucus colleagues in introducing a bipartisan anti-genocide resolution calling on the United States to apply the lessons of the Armenian Genocide in seeking to prevent modern day atrocities across the Middle East, reported the Armenian National Committee of America (ANCA).

This genocide prevention measure stresses that “proper commemoration and consistent condemnation of the Armenian Genocide will strengthen our international standing in preventing modern day genocides,” and, building upon the 2016 official U.S. designation of an ISIS genocide against Middle East minorities, specifically calls for the following: “[T]he United States, in seeking to prevent war crimes, crimes against humanity, and genocide against Christians, Yezidis, Muslims, Kurds, and other vulnerable religious and ethnic groups in the Middle East, should draw upon relevant lessons of the United States Government, civil society, and humanitarian response to the Armenian Genocide, Seyfo, and the broader genocidal campaign by the Ottoman Empire against Armenians, Assyrians, Chaldeans, Syriacs, Greeks, Pontians and other Christians upon their biblical era homelands.”

“We thank Congressmen Trott and Schiff, their colleagues in the leadership of the Armenian Caucus, and all the original cosponsors of this resolution – including House Foreign Affairs Committee Chairman Ed Royce and Ranking Member Engel – for their commitment to ensuring that the lessons of the U.S. response to the Armenian Genocide are applied to help prevent modern-day atrocities taking place across the Middle East,” said ANCA Executive Director Aram Hamparian. “We look forward, in the coming days and weeks, to working with Members of Congress and all our coalition partners to see this genocide-prevention measure adopted by the U.S. House.”

In a letter inviting their House colleagues to co-sponsor this legislation, Reps. Trott and Schiff underscored that: “It is time for the United States government to officially take a stand for the truth, and against genocide denial.”

In 2016, the House of Representatives and the Senate both passed legislation concluding that the atrocities perpetrated by ISIL against Christians, Yezidis, and other religious and ethnic minorities in Iraq and Syria constitute war crimes, crimes against humanity, and genocide. Secretary Kerry subsequently stated that ISIS was “responsible for genocide against Yezidis, Christians, and Shia Muslims.”