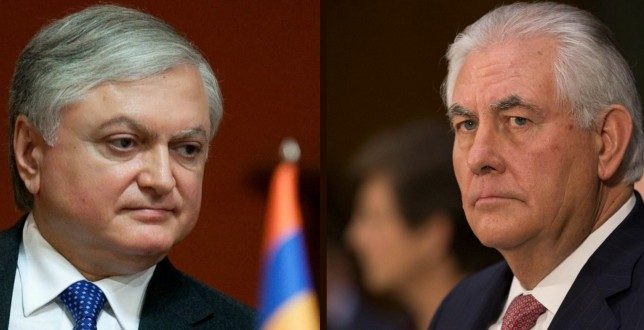 Armenian Foreign Minister Edward Nalbandian had a phone conversation with US Secretary of State Rex Tillerson.

The parties discussed a wide range of issues on the agenda of bilateral cooperation including expansion of trade relations and a number of other pressing regional and global issues.

Edward Nalbandian and Rex Tillerson exchanged views on the steps towards furthering the Karabakh peace process. The Armenian Foreign Minister presented the recent developments in the conflict zone.

In this context the interlocutors stressed the need to implement the agreements reached in Vienna and St. Petersburg.

Secretary Tillerson assured US willingness to maintain active support for the peaceful resolution of the conflict.