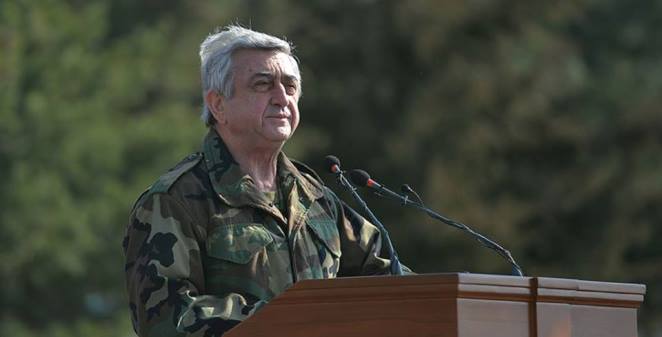 President Serzh Sarkisian made clear on Saturday that he does not plan to leave the political arena after serving out his second and final term in office next year.

“I am constantly asked what I am going to do after 2018,” Sarkisian said, visiting a military base in Nagorno-Karabakh. “I have never planned [beforehand] where I will be in the next stage of my life. I always found myself in places where I was of greater help to our security.”

“I don’t know now what the political situation will be like in 2018, but if the political force headed by me wins the upcoming elections, then based on the configuration at that moment I will play a role, in some capacity, in ensuring the security of our people. I don’t know what that capacity will be, but I will definitely be of help in some format,” he told soldiers and their parents attending a ceremony there.

Sarkisian led Karabakh’s Armenian-backed forces at the start of their war with Azerbaijan and was appointed as Armenia’s defense minister in 1993. He held this and other top security posts in Yerevan before becoming Armenia’s prime minister in 2007.

Armenia will switch to the parliamentary system of government immediately after the end of his decade-long presidency in April 2018. Sarkisian’s political opponents claim that he is intent on holding on to power.

The 62-year-old president has so far not publicly ruled out the possibility of becoming prime minister next year. The current Armenian premier, Karen Karapetian, has made no secret of his desire to retain his post after April 2018.

Some observers have speculated that Sarkisian might only stay on as chairman of the ruling Republican Party of Armenia (HHK) and continue pulling the strings in that capacity. An HHK representative said in November that he will lead the party for “many years” to come.

In his speech, a uniform-clad Sarkisian also mentioned the April 2 parliamentary elections, urging Armenians vote for a political group that has a proven track record on defense and national security. He described security as “the number one issue” facing Armenia and Karabakh. The HHK’s election campaign motto is “Security and Progress.”

“We need to have a strong security hand,” said Sarkisian. “Populism or weakness at the top of the security pyramid would ruin a whole nation.”