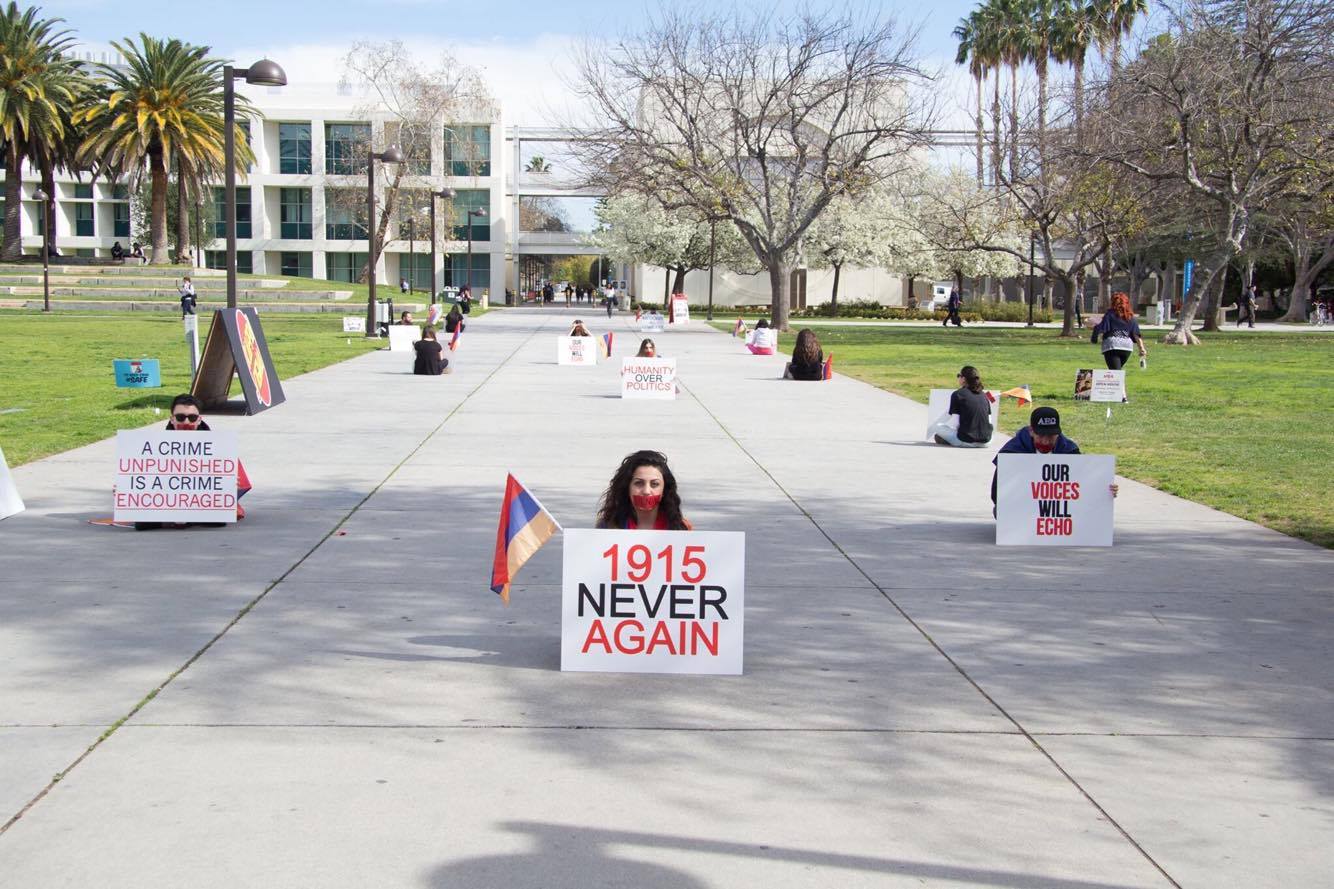 (A.W.)—Armenian students across the United States and Canada participated in the annual “Stain of Denial” silent protests on Feb. 9, against the continuous denial of the Armenian Genocide.

The protests, which were coordinated by the All-Armenian Student Association (All-ASA), were simultaneously held by Armenian Student Association (ASA) chapters and affiliated organizations on their respective college and university campuses. “Stain of Denial” was initiated in 2011 as a silent protest in order to raise awareness of the ongoing denial of the Armenian Genocide and the need for recognition and reparations.

During the silent protests, participants held posters with various slogans in crowded areas on campus and covered their mouths with tape symbolizing genocide denial.

The students, faculty, and community members who participated on Feb. 9, stressed that the Armenian Genocide is not an issue only reserved for the month of April, but it has a profound effect on Armenians every day.

“Whereas April 24 is traditionally the day that the world commemorates the Armenian Genocide, the memory of the genocide and its ensuing denial continues to be a daily struggle,” the All-ASA said in a statement. The organization added that it prioritizes this campaign because Armenian college students are continuously faced with genocide denial on campuses.

“’Stain of Denial’ is an important protest. In order for the Armenian diaspora to push for recognition, awareness must be spread regularly and not just on once a year, on April 24,” second year UCLA (University of California – Los Angeles) History major Van Der Megerdichian told the Armenian Weekly. “It is also imperative for people to know and understand that we are not solely seeking recognition, rather reparations and restitution.”

The number of participating ASA chapters has continuously increased throughout the years.

“I wondered how much of a difference out small group could make. But seeing pictures of groups from other states and even a group from outside the U.S. reassures me that this event is going to make a tangible impact on our peers,” said first time participant and junior at Yale University Gor Mkrtchian. “Beyond that, I know that a hidden benefit lies in students deepening their own knowledge of their histories in preparation for this event.”

Thousands of Armenian students, community members, and faculty, both Armenian and non-Armenian, took a stand and reiterated that the Armenian Genocide is not just a “day in April,” but a year-round struggle for justice.

The campaign also included an online component. Those who were not able to attend raised awareness through social media, by incorporating the hashtags #StainofDenial, #ArmenianGenocide, and #DivestTurkey into their online posts. While the protests highlighted the history of the Armenian Genocide and its consequences, it also raised awareness of the #DivestTurkey initiative.

This included education about resolutions that ASAs have passed through their student government councils, including both Armenian Genocide recognition and divestment bills, the latter of which targets over $70 million of University of California funds allocated toward the Turkish government.

For the first time, the protests reached an international scope, with participation from the following Canadian universities: University of Ottawa, Concordia University, and the University of Montreal.

“When we got contacted about the ‘Stain of Denial’ campaign, we were quick to jump on it. It was our first genocide related event since the rebirth of our association,” explained Arevig Afarian, a Junior at Université de Montréal. Speaking to the Armenian Weekly, Afarian explained that since Canada recognized the Armenian Genocide in 2004, the Armenian Student Associations usually focus on commemorating the memory of the victims during the month of April. “One of the reasons our association wanted to take part of the ‘Stain of Denial’ was due to its imprescriptible nature. We firmly believe that the genocide should not be a topic of conversation for a month and be ignored the rest of the year,” Afarian said.

Afarian went on to explain that passersby would stop and voice their appreciation that students were raising awareness about Turkey’s denial. “They knew about the genocide, they knew about Turkey denying their past, and they supported our cause,” she said.

Due to weather conditions in the Boston area, the silent protests expected to take place at Northeastern and Tufts Universities were postponed and will take place on Feb. 15.