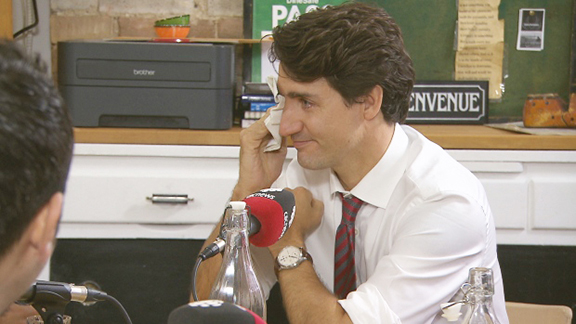 (CBC News)—Justin Trudeau wiped away tears during a roundtable with Syrian refugees and sponsors, as one newcomer recalled being greeted by the prime minister when he arrived in Canada one year ago.

Trudeau and Vanig Garabedian were among a small group of people who gathered at a Toronto restaurant last week to reflect on the first year of the Syrian refugee program.

Addressing the prime minister, Garabedian recalled the moment last December when he stepped onto a Toronto-bound plane in Beirut, Lebanon, and shook the hand of a Canadian who was greeting passengers as they boarded.

“He shook hands with me and said, ‘Go and make Canada a better place.’ So that was the very last person I shook hands with in the Middle East. Then we landed at Pearson airport, and the very first person we shook hands was the prime minister,” Garabedian said, prompting Trudeau to grab a napkin off the table and wipe his eyes.

Garabedian said landing in Toronto not only meant that he and his wife — as well as their daughters — were safe, it also meant they had taken on “the responsibility of joining the Canadian family and trying to build this Canada, this country, this great nation.

“When I met Mr. Prime Minister at that moment, he said two words: ‘Welcome home.’ So imagine you are living in a warzone, you are leaving your home and you are welcomed by two words: welcome home,” said Garabedian, a gynecologist by trade.

“So my memories of that moment went back to Syria before war, our life, our happiness there, and the horrible moments we went through during war. So I felt myself that I’m proud to be here.”

Asked by Matt Galloway, host of CBC Toronto’s Metro Morning, why it was important for him to be at the airport to greet that planeload of refugees on Dec. 10, 2015, Trudeau said it was because the Syrian refugee program “was something I knew that all of Canada was involved in, that making the commitment to bring over 25,000 and more Syrian refugees was something that the government couldn’t do on its own.”

Trudeau noted that he had only been on the job for about a month, and throughout the federal election campaign Canadians’ expressed interest in doing more to help refugees.

“I felt that being there in the name of all Canadians to welcome people was really important,” he said.

“Watching you and your girls walk through this airport toward me was a moment in which I understood just the kinds of things that we can do as a country and that I get to help this country do,” he said.

“You wouldn’t have been walking on Canadian soil that night if I hadn’t said, ‘We can do this together’ and made it done. And that for me was as strong and clear a reinforcement that I was going to be okay in this job. It was, on a personal level, it was very, very touching for me.”

The video of the meeting can be watched below.