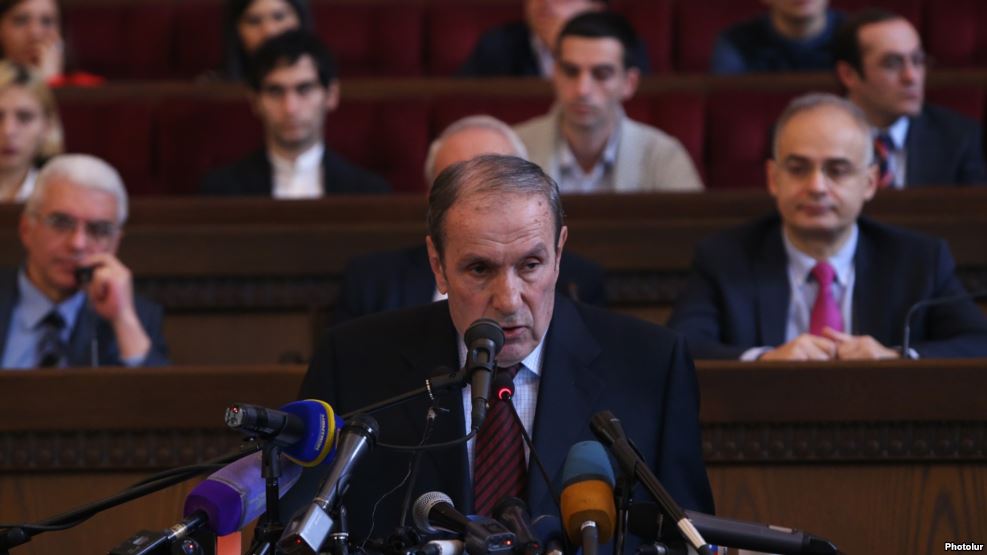 (RFE/RL)-  Opposition leader Levon Ter-Petrosian has expressed readiness to help President Serzh Sarkisian achieve a compromise solution to the Nagorno-Karabakh conflict, reaffirming his view that peace with Azerbaijan is vital for Armenia’s security and prosperity.

“The main prerequisite for Armenia’s and Karabakh’s security, economic development and improved demographic situation is a settlement of the Karabakh conflict and Turkish-Armenian relations,” Ter-Petrosian told a pre-election congress of his Armenian National Congress (HAK), a major opposition party.

“On the resolution of a pan-national issue such as the Karabakh conflict, all political parties, civic organizations and intellectual circles committed to peace and reconciliation must stand by the current government, regardless of their attitudes towards it,” he declared.

“It is time to finally realize that in order to achieve success in the Karabakh settlement process Serzh Sarkisian needs to act like a leader enjoying the backing of the majority of the [Armenian] people, political forces and non-governmental organizations, rather than a weak leader having serious problems in his own country,” he said. “To that end, one should encourage him to take a decisive step towards the Karabakh settlement, rather than upset him with cheap ‘patriotic’ bravado.”

“There is no solution other than the one put on the negotiating table,” Ter-Petrosian added, referring to the Basic Principles of a Karabakh peace which were first drafted by the mediators a decade ago and have been repeatedly modified since then.

The proposed accord calls for Armenian withdrawal from virtually all seven districts around Karabakh which were fully or partly occupied by Karabakh Armenian forces in 1992-1994. That would be followed by a legally binding referendum in which Karabakh’s predominantly Armenian population would determine the disputed territory’s internationally recognized status.

Ter-Petrosian, who served as Armenia’s first president from 1991-1998, claimed that this peace formula is virtually identical with a deal proposed by the three mediating powers in 1997. He strongly advocated it at the time and was forced by more hardline members of his government to resign because of that.

The 1997 peace plan did not call for a referendum of self-determination in Karabakh or envisage any other mechanism for eventually determining Karabakh’s status.

Sarkisian and Azerbaijani President Ilham Aliyev came close to signing a framework agreement based on the Basic Principles at a 2011 summit in Kazan, Russia. According to Armenian and Russian officials, Aliyev scuttled the breakthrough with last-minute demands for more Armenian concessions.

The United States, Russia and France made a renewed push for an Armenian-Azerbaijani settlement following last April’s four-day hostilities in Karabakh which nearly degenerated into an all-out war. Russia’s President Vladimir Putin hosted Sarkisian’s and Aliyev’s most recent meeting in Saint Petersburg in June. Despite continued Russian efforts, the Karabakh peace process appears to have essentially remained in deadlock since then.

Ter-Petrosian said that Moscow still “holds the key” to the conflict’s resolution and that the West “appreciates Russia’s special role in this issue.”

Significantly, he also insisted that despite his bellicose rhetoric Aliyev is a “rational statesman who is capable of taking an adequate step towards peace also extremely necessary for his people.” He at the same time warned that Azerbaijan will suffer a “bitter defeat” and lose “a few more districts” if it tries to forcibly reconquer Karabakh.

Ter-Petrosian has been a harsh critic of Sarkisian ever since his return to active politics in 2007. But shortly after the April fighting in Karabakh, he met with the Armenian president and urged the Armenian opposition to put aside its differences with the government in the face of the military threat from Azerbaijan.

The dramatic overtures fueled suggestions that Ter-Petrosian and Sarkisian could cooperate not only on Karabakh but also domestic political issues in the run-up to the April 2017 parliamentary elections. The HAK leader’s latest speech — which focused on the conflict with Azerbaijan, rather than the upcoming vote — may well stoke this speculation.

Ter-Petrosian, who will turn 72 on January 9, clearly sought to quash it, stressing that his emphatic speech “does not mean cooperation with the ruling regime” and that the HAK will not cut power-sharing deals with the ruling Republican Party (HHK) after the elections. He did not specify his party’s potential electoral allies, saying only that the HAK will put the emphasis on “peace, reconciliation and good neighborliness” in its election campaign.

Time to Cure Armenia from ‘Levon the Virus’