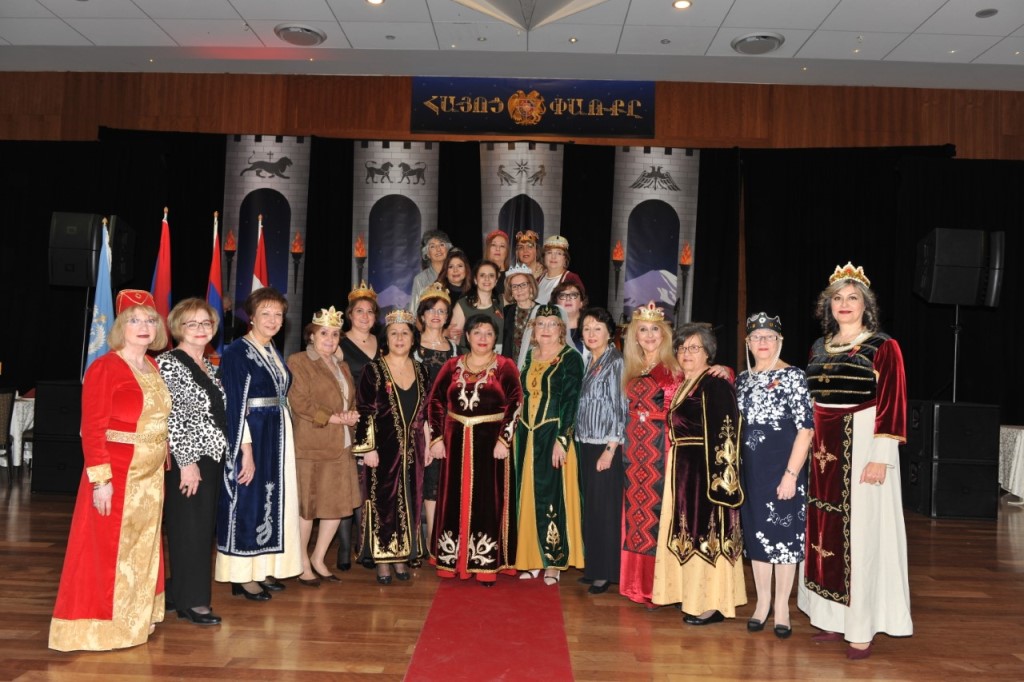 The Armenian Relief Society (A.R.S.) Toronto “Roubina” Chapter’s 25th “Dohmig Or” (Heritage Day) celebration was held on Saturday, December 1, 2018 at the Armenian Community Centre (A.C.C.) Hall in Toronto in the presence of over 400 community members. This year’s Heritage Day was dedicated to the glory of Armenian Kingdoms: Urartu/Van, Artashesian (Artaxiad), Arshaguni (Arsacid), Bagratuni (Bagratid) and Cilician Kingdoms, on the occasion of the centennial celebration of the first Republic of Armenia.

Very Rev. Father Keghart Kusbekian, Pastor of St. Mary Armenian Apostolic Church in Toronto performed the dedication – the traditional wine-pouring ceremony (“Kinetzon”) of the commemorative book, that was diligently prepared by the “Dohmig Or” Book Committee members on this festive occasion. The book reflects the rich history of the Armenian Kingdoms, published professionally both in armenian and english languages, with a beautiful collection of pictures and colorful pages. The editing team of this publication consists of Mrs. Houri Najarian, Mrs. Zepure Dorna and Dr. Sonia Poochikian-Sarkissian.

Following the opening remarks by the Committee Chair, Mrs. Houri Najarian, there was a display of beautiful selections of Armenian royal and national costumes, which were provided by the Deryan Cultural Centre in Yerevan, Armenia. These costumes were modelled by young members of our community in a procession narrated by Mrs. Tamar Matossian.

The Consul General of the Republic of Armenia to Canada, His Excellency Mr. Ara Mgertchian, congratulated the members of the A.R.S. Toronto “Roubina” Chapter and presented his words of appreciation for their successful and continuous contribution to the community and to the Armenian nation.

The Organizing Committee members had a special surprise to thank Mrs. Najarian, the driving force of the ongoing “Heritage Day” celebrations, by presenting her a certificate, which was specially requested from the “Armenia Tree Project” in her honor. On behalf of the A.R.S. Toronto Chapter, a gift and a plaque of appreciation were also presented to her by its chairperson, Mrs. Iren Telemi.

Following the blessing of the tables by Very Rev. Father Kusbekian, traditional and delicious Armenian dishes were served to all, including the famous “ghapama”. During dinner, there was a display of various video-segments from previous celebrations, projected on the screens.

The evening was enriched by the famous singer, Mr. Eli Berberian and his band from Montreal, with their lively, traditional and patriotic Armenian songs, creating great enthusiasm until early morning hours.

All those in attendance expressed their extreme delight and appreciation to the organizing committee members for such a memorable evening, which was enhanced by impressive and colorful presentations about the glorious history of the Armenian Kingdoms.

Special thanks and words of appreciation to the Toronto “Dohmig Or” Committee/Sub-Committee members, program participants, donors, as well as all those who made every effort to ensure the success of the celebration. This memorable event became a reality thanks to our very encouraging and supportive community. The flags of the Armenian kingdoms and the Republic of Armenia. Armenian royal and national costumes displayed by organizers and youth.