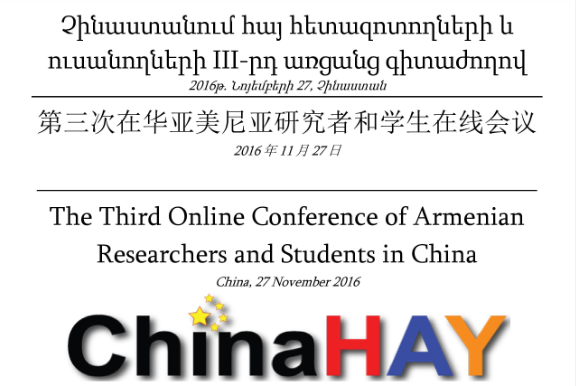 During the Conference, Dr. Mher Sahakyan (China-Eurasia Council for Political and Strategic Studies) talked about how the experience of South Korea could be used to further Armenia’s development. Ruben Gini (Andin Foundation) shared a story about items excavated in Gyumri that can shed light on the relations between the Chinese and the Armenians. Dr. Mikael Ayrapetyan (Pedagogical University of Tianjin) talked about joint programs of the Secrets of Armenia Program and the Armenian Community of China that help make Armenian classical music popular in China. Anahit Parzyan (University of Nanjing) made suggestions for a strategy to create a unified digital market in the Eurasian Economic Union.

Mary Knyazyan (Beijing University of Foreign Languages) spoke about formats for the creation of an Armenian-Chinese dictionary. Araks Nersisyan (Central Ethnographic University of China) gave a speech devoted to the traditional use of Chinese silverware. Dr. Hermine Hovhannisyan (Hong Kong University) presented her observations on the latest innovations in the field of programming.

In her speech addressed to the participants of the Conference, the Armenian Minister of Diaspora Hranush Hakobyan said “The organizers plan and hold this Conference with a heartfelt attitude and a high sense of responsibility. All this helps revitalize the activities of the researchers and students in China. I would cordially like to express my appreciation to Mher Sahakyan, who helped hold this major event, which is honorable for young Armenians in any country.”

In turn, Sahakyan, the President of the Armenian Community of China, mentioned, “We must remember that he who excels others with knowledge will win in the 21st century. This Conference is another attempt to consolidate Armenian scientific thought in China for the benefit of the Homeland.”