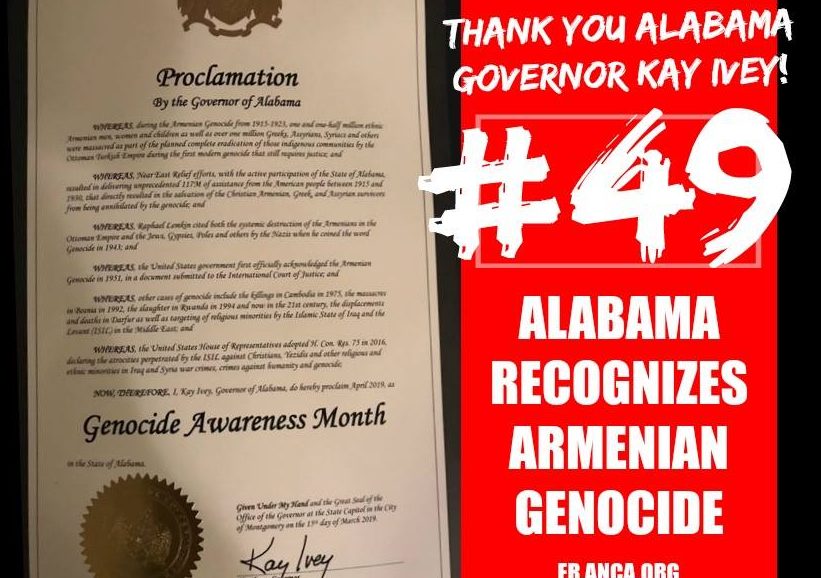 MOBILE, Ala. – Alabama has officially become the 49th U.S. state to recognize the Armenian Genocide. Governor Kay Ivey issued a powerful proclamation recognizing the Ottoman Turkish Empire’s centrally-planned and executed annihilation of close to three million Armenians, Greeks, Assyrians and Syriacs from 1915-1923, according to the Armenian National Committee of America – Eastern Region (ANCA-ER).

“We welcome this proclamation by Governor Ivey, making Alabama the 49th state in the union to officially re-affirm this international crime against humanity,” said ANCA-ER Board Chairman Steve Mesrobian. “This proclamation serves as a powerful reminder that truth about genocides should never be held hostage to the denial of its perpetrators and those who continue to profit from that crime. We salute the Alabama Armenian community and our ANCA coalition partners who together stand united in our efforts to create awareness about the Armenian Genocide and prevent future such atrocities,” said Mesrobian.

“I am so proud of the work that the ANC of Alabama and our friends in Alabama have done to obtain this official recognition of the Armenian Genocide,” said ANC of Alabama activist Jack Hagopian. “Armenians have long called Alabama home, aiding in the education and awareness of the Armenian Genocide throughout the state. It brings me great pleasure to know that our work has been successful. I know that we will continue to educate, motivate and activate our community to ensure that the cycle of genocide comes to an end.”

With the addition of Alabama as the 49th state, Mississippi remains as the last U.S. state to officially recognize the Armenian Genocide.