Unveiling Sara Corning Statue And Other Events In September In Yarmouth, Nova Scotia 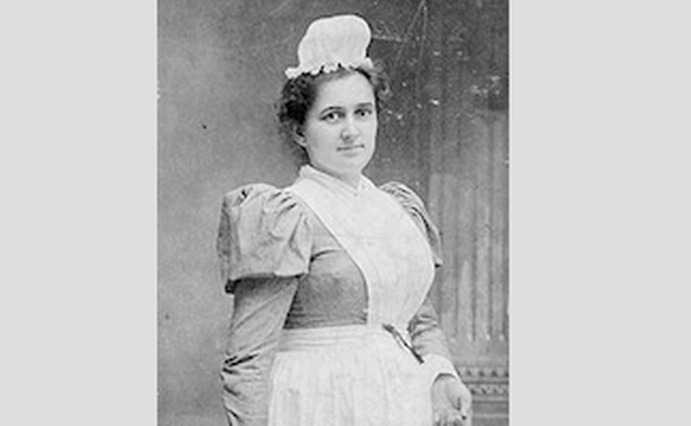 Yarmouth County’s Sara Corning will be focus of activities that will take place Sept. 13-15 in Yarmouth, including the unveiling of a statue of Corning, writes Eric Bourque on Yarmouth County Vanguard website.

A weekend of activities honouring Yarmouth County native Sara Corning is planned for mid-September, including the unveiling of a bronze statue of Corning, which will be located at what was once the site of Zion Baptist Church on Parade Street.

The unveiling ceremony is scheduled for Saturday, Sept. 14, and it will be part of a weekend that will include a play about Corning to be presented at Th’YARC.

Also in the works is a Saturday-evening dinner at the Rodd Grand Hotel.

Corning (1872-1969), who was a nurse, is regarded as a heroine for her efforts in rescuing and caring for thousands of orphans during her 11 years of service in Armenia, Turkey and Greece between 1919 and 1930.

Jennifer Rodney Chown, co-chair of the Sara Corning Society, says the activities planned for Sept. 13-15 in Yarmouth will be a chance for locals and visitors to meet and to reflect on Corning and the significance of her humanitarian work.

“The people of Yarmouth will feel so proud of their hometown girl,” she said, “and it will be just a wonderful opportunity for them to meet the descendants of the (children) Sara rescued and cared for. It’s a wonderful story.”

Rodney Chown and David Chown – also co-chair of the Sara Corning Society – were in Yarmouth late last week and met with representatives of the Town of Yarmouth and the Yarmouth County Historical Society to discuss their plans.

The statue was paid for by a donor from the Armenian community in Toronto. The sculptor is from Montreal and is Armenian as well.

The hope is to have an interpretive panel that would go along with the statue.

The unveiling ceremony – which will take place in either the late morning or early afternoon – will be followed by a reception. Rodney Chown says people will have a chance to visit the Yarmouth County Museum and Archives and perhaps see some of the material there related to Corning.

While the unveiling of the statue will be a highlight of the weekend, things actually will get underway Friday, Sept. 13, at Th’YARC with the presentation of a play about Corning by Chris Bolger, a Yarmouth-area resident and a member of the Sara Corning Society.

The plan is to have two performances of the play Sept. 13 – one for students, one for the general public – and another on Sunday, Sept. 15.

“The exciting thing,” Rodney Chown said, “is LunaSea would like to have a performance in Halifax following the one in Yarmouth and then they would like to take it around the province, so this will be a wonderful way to share Sara’s story.”

If Corning was alive today, Rodney Chown admits, she might be uncomfortable getting all this attention, given her humble nature, “but she would likely celebrate the friendships developing today between those from her home province and the descendants of those she helped to rescue and care for.”

Chown says they expect the weekend’s activities will draw people from away – including from outside Nova Scotia, perhaps even from outside Canada – people who have reverence for Corning and what she did.

But beyond what’s planned for September, Chown says the longer-term goal is to ensure everyone has a chance to learn about Corning and “the heroism of this remarkable woman.”

Here’s a link to the article: