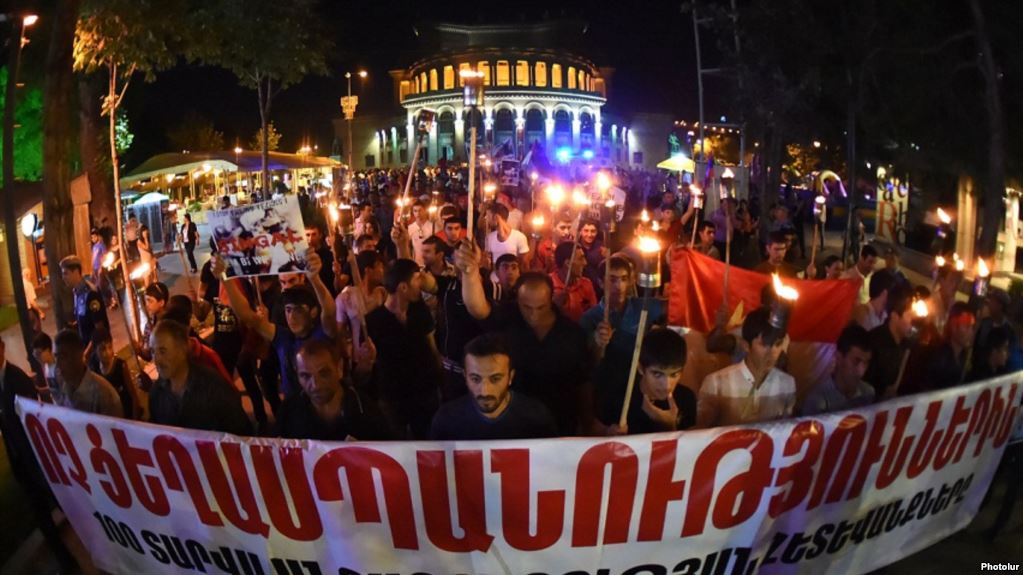 Armenia – Yazidi-Armenian activists protest in Yerevan against massacres of Yazidis in Iraq and other crimes against humanity, 11Sep2014.

Leaders of the Yazidi community in Armenia have urged the authorities in Yerevan to organize a separate election of members of the next Armenian parliament who would represent the country’s largest ethnic minority.

One of the amendments to the Armenian constitution enacted in 2015 stipulates that representatives of ethnic minorities shall be given seats in the National Assembly “in a manner defined by the Electoral Code.” It does not elaborate.

The new code passed last year obligates Armenian parties and blocs participating in the April 2 parliamentary elections to have ethnic Yazidis, Russians, Assyrians and Kurds among their candidates. All election contenders submitted their lists of candidates to the Central Election Commission (CEC) last week.

The leaders of Yazidi organizations in Armenia say they do not even know which members of their community, if any, are now running for parliament on various party tickets. In an open letter to President Serzh Sarkisian, they have complained that “the majority of our community has not had an opportunity to make a real selection” of election candidates.

Amo Sharoyan, chairman of a community group called Media Shangal, insisted on Thursday that the existing legal provisions “do not fully ensure the presence of minorities and Yazidis in particular in the National Assembly.”

Sharoyan and other Yazidi activists believe that their community should be allowed to hold a separate election of parliament deputies representing them in the new assembly.

“People in the community are complaining and telling me that we ourselves must elect [deputies,]” Aziz Tamoyan, chairman of the Yerevan-based Union of Yazidis of the World, told RFE/RL’s Armenian service (Azatutyun.am).

According to the most recent national census conducted in 2011, there are around 42,000 Yazidis living in Armenia. The three other ethnic minorities singled out by the Electoral Code make up an even smaller proportion of the country’s population.