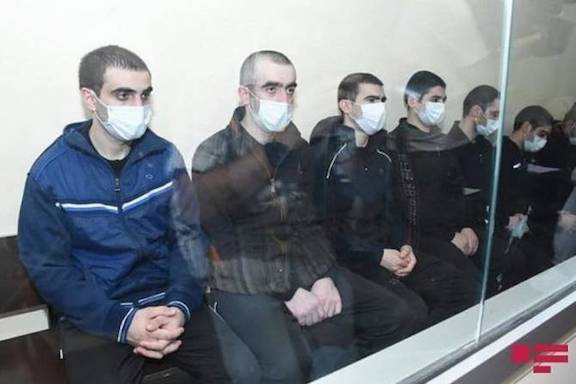 14 Armenian POWs in Baku court during their sham trail

(Asbarez)- After staging a sham trial of Armenian prisoners of war being illegally held captive, an Azerbaijani court of Friday sentenced 14 Armenian captives to jail.

The trial, being held in Baku’s major crimes court, concluded with two POWs, Gegham Serbian and Hrach Avagyan being sentenced to four year in prison, while the other 12 captives, who were charged with allegedly illegally crossing the Azerbaijani border, were given six-month sentences each.

Initially the Armenian captives were charged with terrorism and sabotage, bearing arms and illegally crossing the border and other trumped up allegations.

Azerbaijan has been holding several trials attempting to bring a legal facade to its illegal imprisonment of Armenians.