A Journey Through History On Armenian Street In Singapore 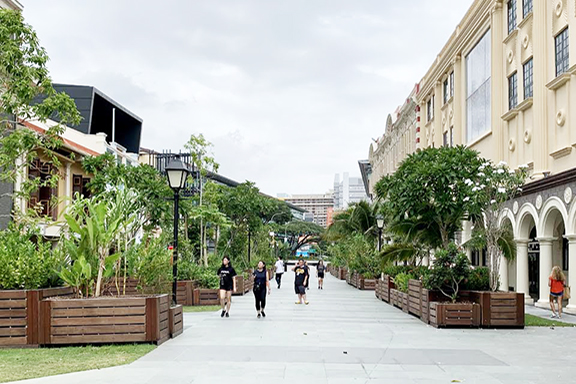 An in-depth look at Singapore’s history reveals a history of civic and commercial involvement by Armenian merchants and entrepreneurs who helped to develop this Asian hub in earlier times. This history is memorialized in part by the existence of Armenian Street in the central district of Singapore, Gus Gomez writes in an article for Asbarez.

Armenian Street in Singapore first opened as Armenian Church Street sometime after the construction of the Armenian Apostolic Church of St. Gregory the Illuminator. The street is essentially tucked between Coleman Street and Stamford Road near what is now one of the largest financial districts in the world.

Today, the street serves primarily as a pedestrian mall with store facades featuring galleries, restaurants, and other attractions adjacent to the Singapore Art Museum. Singapore Management University School of Law is located at the northeast end of the street, housed in a modern sleek structure just east of the Singapore River and Fort Canning, famous for Raffles House and Fort Canning lighthouse.

The Armenian population in Singapore is described as a small community with a significant presence in the early history of Singapore, numbering about 100 individuals at their peak in the 1920s, according to Wikipedia. They were among the earliest merchants to arrive when Singapore was established as a trading post by Sir Thomas Stamford Raffles.

The first Armenian settlers in Singapore were descendants of Armenian people who migrated from Persia to other places including India and the Malay Peninsula. In the early 1800s, Armenian trading firms like Sarkies and Moses became more prominent in Singapore’s economy. Armenian merchants began investing in land by the 1830s.

In the 1880s, the Sarkies brothers—Martin, Tigran, Aviet, and Arshak—founded the Raffles Hotel (named after Sir Thomas Stamford Raffles). The colonial-style hotel is one of the most famous hotels in the world. Today the hotel’s main entrance still opens to Beach Road—what used to be a quieter street along the seashore but is now a busy shopping area along with other luxury hotels in Singapore.

Armenian Street is of further cultural significance in Singapore, which includes other thoroughfares representative of the ethnic, cultural, and spiritual diversity of this country. The Sultan Mosque, for example, is located at the end of Arab Street.

Gus Gomez is a former mayor and councilmember in Glendale and is now a Los Angeles Superior Court Judge. He recently visited Singapore and came upon Armenian Street while exploring the city.