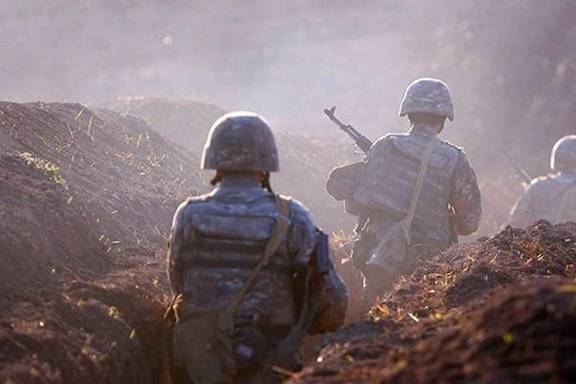 Artsakh soldiers on the battlefield

(Asbarez)- Armenia’s Human Rights Defender Arman Tatoyan issued an announcement in response to Azerbaijani President Ilham Aliyev who, in a statement, called captive Armenian soldiers “terrorists.” Tatoyan said that all captives must be returned to Armenia.

“On December 31, 2020, the President of Azerbaijan, when speaking about Armenian servicemen being held in captivity in his country, stated that they are not prisoners of war. He also stated that they have been arrested and are categorized as terrorists,” Tatoyan said.

Below are excerpts from Tatoyan’s statement.
As the Human Rights Defender of Armenia, I specifically declare that the mentioned statement and other similar statements are in gross violation of the post-war humanitarian process and the international human rights protection standards. The statement by the President of Azerbaijan also directly contradicts the requirement reflected in point 8 of the trilateral statement signed on November 9, 2020 which concerns the exchange of prisoners of war or persons who are in other way deprived of liberty.

The Armenian servicemen captured by Azerbaijani soldiers should be immediately released and returned to Armenia. This must be done immediately and without any precondition since they have the status of prisoners of war.

During and after the war activities, the Azerbaijani authorities have constantly violated international human rights standards and humanitarian commitments by artificially delaying the return of prisoners of war and captives and not reporting the real number of prisoners of war and captives, during this whole process Azerbaijani authorities have continued torture and inhuman treatment, they have been publicizing videos on torture and inhuman treatment in a targeted way, obstructing exchange of bodies, etc.

The studies and reports of the Office of the Human Rights Defender of Armenia confirm that the aim of all these is to cause mental suffering to the families of the prisoners of war, to play with emotions of the Armenian society and generate tension in Armenia.

The monitoring clearly confirms that, in the case of the Azerbaijani authorities, it is necessary to always act with specific guarantees that will ensure full implementation of their humanitarian commitments and inviolability of international human rights standards.

Thus, I draw the attention of international community and particularly international bodies with human rights protection mandate to the mentioned statement of the President of Azerbaijan to exclude any violation of the humanitarian process and ensure strict compliance of the process with international human rights standards.

What Can the Diaspora Do Now?