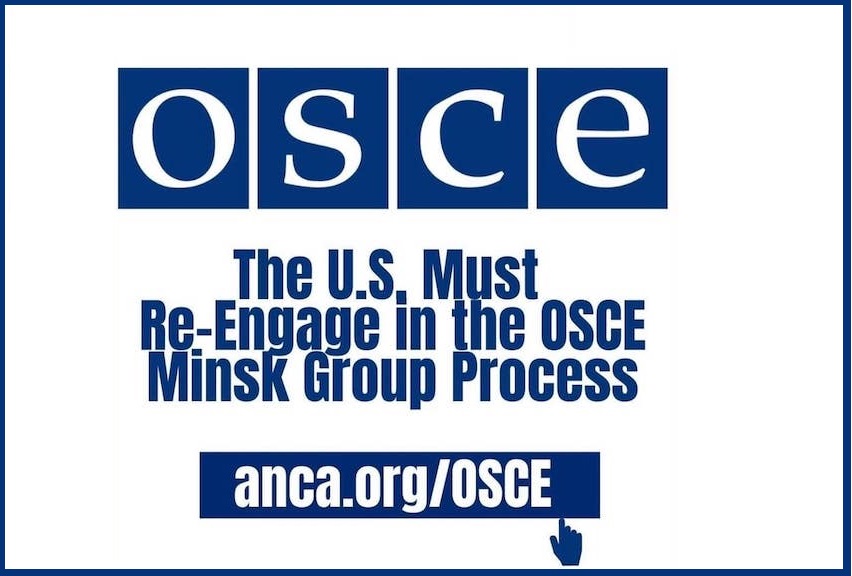 WASHINGTON—Congressional calls mounted this week for the U.S. to immediately re-engage in the OSCE Minsk Group process to revisit the reckless agreement forced by Turkey and Azerbaijan on Armenians, ensuring that all three Co-Chair countries – the U.S., France, and Russia – participate meaningfully in discussions about its terms and timelines.

“The ANCA continues to work with the Administration and Congressional leaders to urgently re-engage in the OSCE Minsk Group Co-Chair process to ensure that all three Co-Chair countries review and revise the terms and timelines of this disastrous deal forced on the Armenian side.”

The ANCA has issued a national call to action urging Congressional leaders to speak out in support of U.S. re-engagement in the OSCE peace process, encouraging activists to contact their legislators by visiting anca.org/OSCE

Congressional Armenian Caucus Co-Chair Frank Pallone (D-NJ), shared grave reservations about Monday’s ceasefire deal imposed on Armenia and the need for a long-term solution that respects the right to self-determination of the people of Artsakh. “The ceasefire signed earlier this week regarding Nagorno Karabakh isn’t a long-term peace settlement. There are many critical issues that must be resolved before this conflict can come to a lasting resolution.  The @StateDept  must immediately reengage with @OSCE to address them.”

Rep. Pallone continued that “Any future negotiated settlement supported by the U.S. must ensure the people of Artsakh can reconstruct their communities and rebuild their lives without fear of further bloodshed. The terms laid out in the current ceasefire are untenable for Artsakh’s long-term security.  The International Community must finally recognize the right to self-determination for the people of Artsakh and their role as negotiators. Without that, they will continue to face future assaults by Azeri and Turkish forces without any option of formal redress.”

Senior Member of the House Foreign Affairs Committee Brad Sherman (D-CA) underscored the absence of U.S. leadership in the formulation of the flawed ceasefire deal, stating, “The terms of the Russia and Turkey-backed ceasefire ending Azerbaijan’s unprovoked violence against #Artsakh and #Armenia are unfair. The Trump Administration’s absence was glaring and led to disastrous results for the people of Armenia.  Who drafted this ceasefire agreement? None other than Putin and Erdoğan. This is the result of a lack of U.S. leadership. We must not stand for this disastrous deal forced on Armenia. We must not view it as a final settlement.  I ask the @StateDept  and the US Co-Chair to the @OSCE  to work with our partners to achieve a fair and balanced long term settlement. Artsakh’s right to self-determination must be preserved.”

Congressional Hellenic Caucus Co-Chair Carolyn Maloney (D-NY) expressed concerns that the ceasefire deal, as presented would only destabilize the region, noting, “The Russia and Turkey-backed ceasefire forced on Armenia and #Artsakh will further destabilize the region and won’t provide long term protection to the civilian population who’s paid the price of Azerbaijan’s aggression.  The Trump Administration’s absence in the peace process has left a void that allowed autocrats Putin and Erdogan to step in and dictate the terms of the agreement. The @StateDept  and the @OSCE  must immediately reengage in talks for a long term solution.”

Rep. Lori Trahan (D-MA) noted, “The Nagorno Karabakh ceasefire fails to solve many of the fundamental issues at the root of decades of violence in the region and leaves the people of Artsakh vulnerable to future attacks by Azerbaijan and Turkey. The @StateDept  should convene the international community to help craft a long-term agreement that will end the threat of future violence in the region and ensure Artsakh’s security.”

Rep. Tony Cardenas(D-CA) welcomed the peace for Nagorno Karabakh but expressed his reservations about the peace deal. “The ceasefire agreement this week is untenable to Artsakh’s long-term security,” stated Rep. Cardenas.  “@StateDept  should immediately begin working with @OSCE  to achieve a durable resolution to the underlying territorial dispute that will lay the groundwork for lasting peace and stability. The people of Artsakh have a right to self-determination and to live their lives without fear of further violence.”

Rep. Judy Chu (D-CA), who visited Artsakh just last year, was clear and concise in her statement: “The ceasefire forced on Armenia regarding Nagorno-Karabagh needs to be immediately addressed by @OSCE. I call on @StateDept  to take immediate action in this regard and finally recognize Artsakh.”

In a letter to President-Elect Biden on Thursday, Congressional Armenian Caucus Co-Chairs Frank Pallone, Jackie Speier (D-CA), and Adam Schiff (D-CA), urged his Administration to lead U.S. re-engagement in “negotiations for a lasting settlement through the OSCE Minsk Group.”

The Armenian Caucus leaders underscored that “the ceasefire that was reached this week does nothing to settle the underlying territorial dispute or ensure a lasting and equitable peace. The United States should work with the Minsk Group to define the future status of Nagorno Karabakh in a way that is consistent with the right of self-determination.”

The Armenian Caucus Letter to Biden also called for an end to the annual U.S. Administration waiver of Section 907 restrictions on U.S. aid to Azerbaijan, urged expanded U.S. humanitarian assistance to help the over 100,000 displaced Armenians from Artsakh, a complete reset of U.S. policy toward Turkey, and efforts to strengthen U.S. ties with Armenia.

Statement of Bryan May on the cessation of fighting in Artsakh