ANCC Statement on 32nd Anniversary of the Sumgait Pogrom 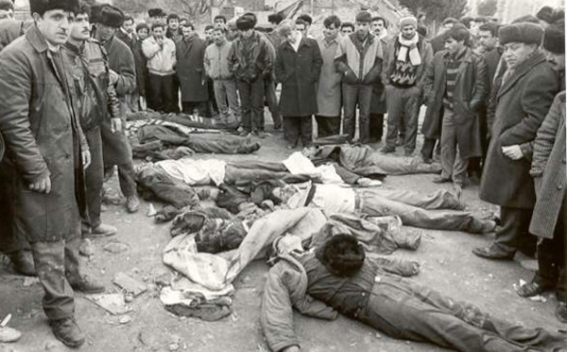 OTTAWA — This week, the Armenian National Committee of Canada solemnly commemorates the 32nd anniversary of the Sumgait Pogrom, a systematic massacre committed by Azeri nationalist forces against innocent Armenians in Sumgait, Azerbaijan.

During the waning days of the Soviet Union, Armenians in Armenia and Artsakh demanded reunification with Armenia and later, their fundamental right to self-determination and independence. As a response, Azeri nationalists carried out gross massacres in the city of Sumgait, claiming the lives of over 36 innocent Armenian men, women, and children.

While many media outlets reported and condemned these barbaric acts, the international community remained and continues to remain largely silent on these crimes, and that silence led directly to a larger conflict costing thousands of lives.

On Wednesday, February 26th, MP Emmanuella Lambropoulos made a commemorative statement in the House of Commons, highlighting the importance of remembering such tragedies and strongly condemning all forms of xenophobia, hatred and racism. The following day, on February 27th, MP Faycal El-Khoury stood in the House with a strong statement condemning Azerbaijan’s crimes against humanity, while MP Bob Saroya unmasked Azerbaijan’s state-sponsored hate propaganda against Armenians that continues to impede the Artsakh Peace Process.

“We thank all the members for their strong support and leadership on this issue and remain committed to raising awareness on this important subject while urging other elected officials to learn more about these events and voice their strong position against hateful crimes and ongoing xenophobia against Armenians in Azerbaijan and other parts of the world” said Hrag Tarakdjian, Co-President of the ANCC.

This ethnic cleansing campaign committed by Azeri forces against Armenians set a haunting precedent for further crimes against humanity, including the Baku Pogrom committed in 1990 and the ongoing state-sponsored anti-Armenian hate campaign in Azerbaijan.

“Azerbaijan’s shameless denial of these crimes and their continuous warmongering and unconstructive rhetoric towards Armenians and the Artsakh peace process makes it obvious that official Baku has absolutely no intention to commit itself to the peaceful resolution of the Artsakh conflict” said Shahen Mirakian, Co-President of the ANCC.